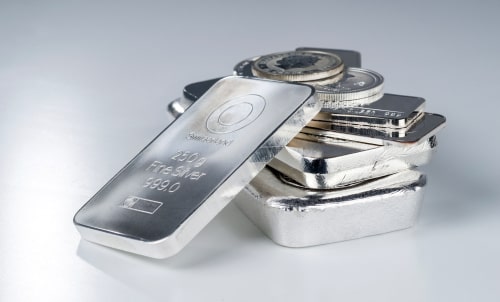 (Kitco News) The outlook for silver is not too optimistic with prices expected to decline by year-end, according to Capital Economics, which identified key price drivers in its latest report.

Any price gains made due to economies re-opening and the industrial outlook improving are to be offset by lower safe-haven demand, the report said.

“The outlook for silver prices is relatively poor. As the global economy slowly revives in the second half of the year, we suspect that any (marginal) silver price gains accrued from industrial demand will be more than offset by falling safe-haven investment, pulling silver prices lower by year-end,” O’Rourke and Kozul-Wright stated.

Beyond 2020, silver’s path looks better as “a protracted recovery” in industrial metals demand will give prices additional support and push silver to “finally outperform gold” amid dwindling safe-haven demand.

In terms of key drivers for silver, industrial demand will continue to be a central element, but will have a lesser impact on prices, the two economists noted.

“The silver price is still influenced by the price of industrial metals, albeit by less than in the past. Going forward, we expect this to continue to be the case,” they wrote. “Around 50% of silver demand stems from its industrial uses. This compares with less than 10% for gold.”

Overall, the share of silver demand that comes from the industrial sector has been falling since the Global Financial Crisis, O’Rourke and Kozul-Wright pointed out.

The report also added that the gold price has become a bigger driver for silver than in the past via third-party factors like the U.S. dollar, interest rates, and inflation.

“The strength of the U.S. dollar influences silver in a similar way to gold. As the dollar strengthens, silver becomes more expensive to purchase in non-dollar currencies, and so its nominal dollar price tends to fall,” the economists said. “Interest rate expectations also influence the silver price. Since silver is a non-interest-bearing asset, holding it over other assets incurs an ‘opportunity cost’ … At the same time, inflation expectations also affect silver … when inflation expectations increase, silver demand tends to rise.”

Another key metric Capital Economics examined was whether silver is a high beta version of gold.

“Silver is also often referred to as a high beta version of gold. The beta of an asset is how much its price changes (on average), given a change in the price of another asset. A beta of one implies that the prices move in lockstep. A beta of above one (a high beta), in this context, means that the silver price changes by more than the gold price when the latter rises or falls,” the economists explained. 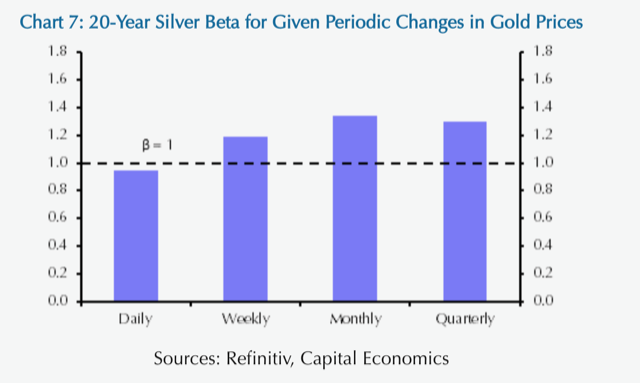 Looking at the past 20 years, the report pointed out that there is little evidence to suggest that that silver is a high beta version of gold.

“For every 1% daily change in the gold price, the silver price moved by 0.94% on average. Over longer periods, however, the price of silver has tended to be more volatile than gold prices,” O’Rourke and Kozul-Wright wrote.

When looking at whether silver was a good portfolio diversifier, Capital Economics concluded that the metal’s “credentials as a safe-haven asset are mediocre.”

“The silver price declined alongside equities in six of seven periods (the only exception being 2018), whilst gold rose in all instances but one,” O’Rourke and Kozul-Wright said.