Gold price is stuck below $1,800, when can it break out? Analysts weigh in 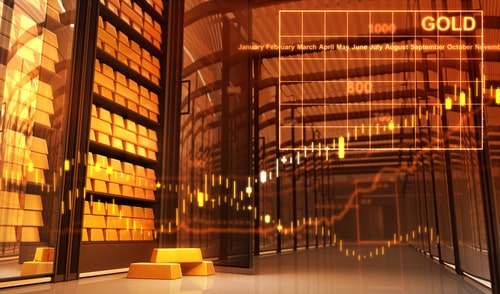 (Kitco News) Rising tensions between the U.S. and China are keeping gold up and stocks down as the U.S. heads into the long weekend. Gold bulls are eyeing rising geopolitical tensions that could finally help gold break the coveted $1,800 an ounce level.

“Investors might see history repeating itself as geopolitical tensions – with China at the center – revived concerns about another trade war,” said ING strategists.

Escalation in the U.S.-China relations came as China published a draft legislation to impose national security legislation in Hong Kong following last year’s surge of anti-government protests in the city.

“The law sets up the possibility of a clash between Chinese security and pro-democracy demonstrators in Hong Kong, as well as a review of the city’s special trading relationship by the US. Both stand to cause prolonged under-performance in the Hang Seng,” said London Capital Group head of research Jasper Lawler.

The U.S. has already condemned the Chinese proposal, calling it “disastrous” and urging China to reconsider.

“This could spark renewed protests in the former British crown colony, causing the already fraught relationship between China and the U.S. to deteriorate even further,” said Commerzbank analyst Cartsen Fritsch.

Despite gold’s rally on Friday, the precious metal has been stuck in a fairly narrow range. June Comex gold futures were last trading at $1,734.50, up 0.73% on the day.

“Gold is acting very well. We are seeing it come off from a bottom alongside a stronger dollar. Gold tested $1,722, which is a 20-day moving average. That is encouraging going into the long weekend,” LaSalle Futures Group senior market strategist Charlie Nedoss told Kitco News on Friday. “It is big that gold can make gains with the stronger dollar here.”

Gold and the fear trade

In the short-term, increased geopolitical tensions could actually hinder gold’s move up because they boost the U.S. dollar, TD Securities head of global strategy Bart Melek pointed out.

“Whenever those tensions rise up, you have the Chinese RMB weaken and the U.S. dollar firm up. The danger for gold is that we could get a shoot up in volatility, which generally doesn’t include anything else but dollars. When the U.S. dollar firms up, gold doesn’t do too well. In the short-run, these tensions will likely get people more into the safety of U.S. dollar and gold could suffer,” Melek explained. "Longer-term, it is a different story.”

But once the fear trade kicks in, gold will see gains, said Nedoss.

“With China looking more inward, and the Hong Kong situation developing, the dynamic in the gold market is changing from an inflation trade to a geopolitical and economic fear type trade,” Nedoss said. “I see gold pressing higher next week.”

It is also important to keep an eye on how these geopolitical tensions impact the overall global recovery and whether they could potentially “force central banks to do more,” said SIA Wealth Management chief market strategist Colin Cieszynski.

Tough for gold to break out

It has been tough for gold to break into the $1,800 an ounce level despite solid support holding prices well above the $1,700 an ounce.

“We are at $1,735 — off from this week’s highs and that continues to be part of the pattern where we are having difficulty to break out into the $1,800,” Melek noted.

The combination of fairly strong equity markets, firm U.S. dollar, and worries of disinflation in the short-term are keeping gold in this narrow range, the strategist said.

“We are already seeing CPI numbers that are printing negative. That means real interest rates are unlikely to go lower. If anything, it is possible that real interest rates could go up,” Melek said. “There is very little chance for now that Fed will move to move negative."

Markets are in a bit of a waiting mode for now, added Cieszynski, noting that gold prices are limited on the upside and downside.

“Gold has had a good move up here and markets are stabilizing and waiting to see how things go. Gold still has a big tailwind behind it from all the central bank stimulus. At the same time, we are at the stage of things starting to reopen and there is no more panic,” he stated.

Cieszynski is neutral on gold short-term, but bullish in the long-term, looking at next major resistance level to be at $1,820, which dates back to 2011-2012.

Macroeconomic releases will continue to play a key role for the gold price’s trading pattern as economists continue to assess just how bad things got during the shutdowns.

“The data could have an impact on central banks. Is the data so bad that the central banks would have to bring in more stimulus or not?” Cieszynski pointed out.

Next week, Thursday will probably be the most important day to keep an eye on in terms of data, as the updated U.S. Q1 GDP number comes out along with durable goods orders, continuing jobless claims and pending home sales.

“We expect the GDP release to be revised a little lower from the first -4.8% QoQ annualised print and the market to remain to look for fresh U.S. stimulus – which may be several weeks away,” ING strategists wrote on Friday,

Another event markets will be keeping a close eye on is China’s National People's Congress (NPC), which began on Friday with a focus on the economy, the coronavirus, and Hong Kong.

“The most closely watched event is likely to be the release of more details on the policies outlined at China's NPC. Of particular interest will be clarification on China's infrastructure spending and policy plans,” Capital Economics economists said.

The big headline to come out of this on Friday was that China is not going to be setting a GDP target for 2020, citing great uncertainty due to the coronavirus.