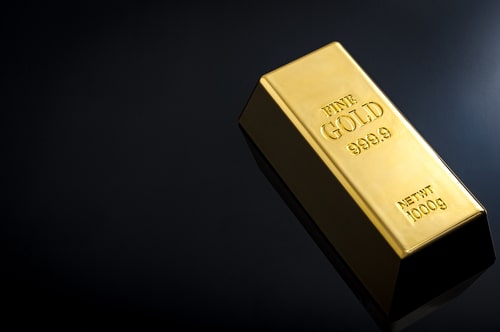 (Kitco News) The yellow metal could be looking at nearing the $5,000 an ounce price tag in a decade and that is a conservative estimate, according to the annual In Gold We Trust Report published by Incrementum AG.

The 14th annual report made some pretty bold predictions for the gold market, forecasting prices to, at least, approach $5,000 an ounce and possibly even push towards $9,000 an ounce by 2030, Incrementum AG fund managers and authors of the report Ronald-Peter Stoeferle and Mark Valek wrote on Wednesday.

The difference between whether gold will be near $5,000 an ounce or $9,000 an ounce will depend on the global debt situation as well as inflation.

“The proprietary valuation model shows a gold price of USD 4,800 at the end of this decade, even with conservative calibration. Should money supply growth develop in a similar inflationary manner to that of the 1970s, a gold price of USD 8,900 is conceivable by 2030,” the report stated.

The monetary systems in their current form all have an expiration date, the authors of the report said. “Due to the expected economic and monetary turbulences, the coming years will hold many challenges for investors,” Stoeferle and Valek wrote.

In last year’s report, the authors pointed out that gold was in the early stages of a new bull market.

However, in the short-term, prices could still surprise to the downside as there might be too much optimism in the gold space.

“From the point of view of current market sentiment, seasonality, and the CoT report, we would not be surprised to see a several-week consolidation phase,” Stoeferle and Valek wrote.

Longer-term, the report sees new all-time highs for gold as just a matter of time. In dollar terms, that would mean gold breaching $1,920 an ounce level and on the inflation-adjusted basis, it would mean gold climbing above $2,215.

“The question is not whether the gold price in USD will reach a new all-time high, but how high this will be. The authors are convinced that gold will prove to be a profitable investment over the course of this decade and will provide stability and security in any portfolio,” the report said.

The COVID-19 outbreak has changed the market landscape quickly by accelerating an overdue recession, according to the authors of the report.

“[The coronavirus] was then only the straw that broke the camel’s back … We are currently experiencing the most pronounced economic contraction in 90 years. The debt-driven expansion in the U.S. has been cooling off since the end of 2018, and gold analysts had already warned of darkening recession clouds last year. Measured in gold, the U.S. equity market reached its peak more than 18 months ago. COVID-19 and the reactions to it act as a massive accelerant,” the report noted. 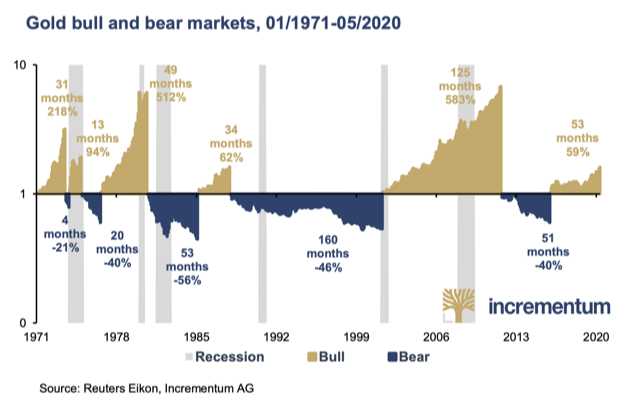 Incrementum AG has ruled out a V-shaped recovery as economies around the world reopen.

Another major trier for the gold price is the failure of monetary policy normalization, which has serious consequences for inflation and debt management.

“There is unanimity among governments and central banks on how to combat the economic consequences of the Covid-19 crisis: As many people as possible should be saved, whatever the cost … The debt is now threatening to get out of hand for good,” the report said.

But after the COVID-19 outbreak, the world will be facing a global debt crisis.

“It will probably no longer be possible to finance the debt, as global savings volumes are no longer sufficient to cover the financing requirements necessary to keep the electronic printing press up and running,” the authors wrote.

According to the report, inflation concerns start to come in as well, which sees inflation as the “dominant investment theme” for the coming years.

“Central banks are in a quandary when it comes to combating future inflation. Due to overindebtedness, it will not be possible to combat nascent inflation with substantial interest rate increases,” Stoeferle and Valek said.

This is all great news for gold because it means that real interest rates will have to remain in the negative territory for a long time. Silver and mining stocks also look to benefit from this, the report added.

“The interventions to combat the pandemic are overstretching the debt sustainability of many countries. Government bonds will increasingly be called into question as a safe-haven. Gold could take on this role,” the report said.