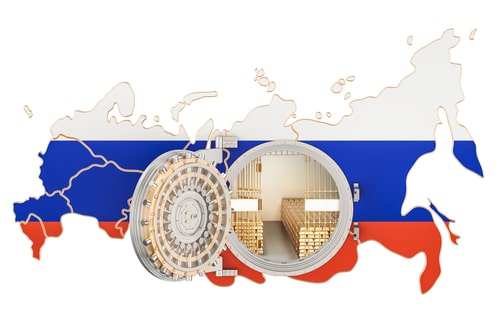 (Kitco News) New statistics out of Russia show that gold production surged by 9.26% and silver production dropped by 11.1% on an annual basis in 2019, according to the country's Ministry of Finance.

Until April of this year, Russia has been steadily increasing its central bank gold reserves.

But as the coronavirus outbreak reached Russia, the central bank announced that it was halting all domestic gold purchases for the time being. Prior to 2020, all the newly produced gold was being bought up by the Russian central bank.

Another interesting fact out of Russia is that country’s banks have been increasing the sale of their gold holdings, citing increased demand for the yellow metal and rising prices, local Russian media reported.

In April alone, gold exports by Russian banks rose by 15%, totaling 4.6 tons, Russia’s Interfax reported. This trend has been going on since November of last year. In the past six months, Russian banks exported 17 tons of their gold reserves.

Back in April, Russian banks asked the nation’s central bank to restart its official gold purchases, citing concerns over gold exports amid disruptions in the transportation industry due to the COVID-19 outbreak.

Russia is the third-largest gold producer in the world. And aside from the nation’s own central bank, the country’s top gold buyers are the U.K. and Switzerland.