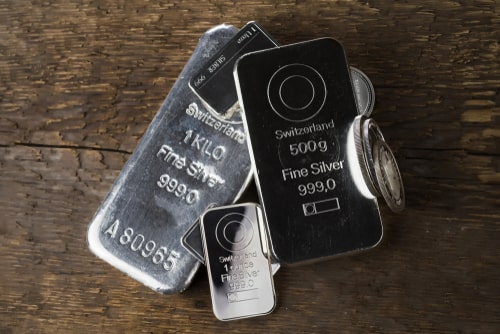 (Kitco News) Silver has better chances at rallying into the year-end than gold due to its positioning, investor sentiment, and industrial demand, according to Orchid Research.

“We expect silver to be relatively more resilient than gold due to its lighter spec positioning. In fact, we think silver is better ‘positioned’ to rally in the months ahead,” Orchid Research wrote in a Seeking Alpha post on Wednesday.

Investors are still waiting for that massive silver rally to come after the metal was left in the dust in comparison to gold’s gains over the past year.

In the past week, silver, just like gold, has been feeling some price pressures with July Comex silver last trading at $17.520, down 1.43% on the day.

But things will turn around for silver in the second half of the year, the post stated, citing investor sentiment and industrial demand.

“While investor sentiment toward silver was neutral to bearish in Q1, it has sharply improved since the start of Q2. ETF holdings are up 25% YTD,” Orchid Research noted. “This, in combination with a plausible rebound in industrial demand for silver, could push … [silver] strongly higher into the year-end.”

Orchid Research advised to buy silver on dips while waiting for those longer-term gains.

“SIVR [Aberdeen Standard Physical Silver Shares ETF] will enjoy a strong uptrend in the months ahead because 1) it has more catch-up to play after its marked underperformance in Q1, 2) it will likely enjoy a rebound in industrial demand as economies re-open for business, and 3) there is a positive shift in investor sentiment,” the post said.

The speculative positioning in silver is looking lighter than that of gold’s, which is why prices might not see as much selling pressure as the yellow metal, Orchid Research added.

“The light spec positioning in the silver futures market is bullish for the COMEX silver spot price,” the post stated. “The speculative community slashed noticeably its net long position in COMEX silver in the week to June 9, according to the CFTC. This was the first decline in four weeks and the largest since March. Nevertheless, the net long speculative position in COMEX silver is still up 1,181 tonnes (4% of annual supply) over the past month, suggesting that a positive shift in sentiment has emerged.”

Silver-backed ETFs also saw 13th straight week of buying, which has helped to offset the lack of industrial demand in Q1 and Q2 due to all the COVID-19 shutdowns.

“ETF investors have recently come to the conclusion that the silver price was too low compared to the gold price and as such, silver could not be ignored as an alternative safe-haven asset. Silver ETF holdings have surged by roughly 25% since the start of the year,” Orchid Research said.

On top of that, industrial demand could start to see a recovery in the second half of the year as economies reopen worldwide.