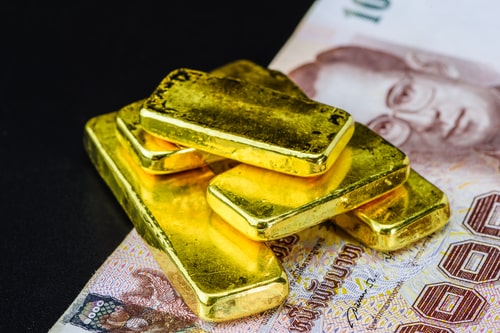 (Kitco News) Thailand saw its gold shipments jump 735% on an annual basis in May while overall exports tumbled 22.5% due to the coronavirus outbreak, according to the commerce ministry’s data.

People in Thailand rushed to sell gold to take advantage of higher prices amid a dire economic situation in the country amid the COVID-19 pandemic, local media reported.

This trend is unlikely to go away any time soon as gold continues to trade near 7.5-year highs. At the time of writing, August Comex gold futures were trading at $1,769.90 an ounce, down 0.29% on the day.

Increased gold exports have been putting upward pressure on the Thai baht, said the Bank of Thailand (BOT), which is considering new measures to limit the impact.

Some of the measures could include more relaxed fund outflows rules, additional trading options, or limited gold activity, Reuters quoted analysts and traders as saying.

The BOT said back in November that it was already preparing to allow gold futures trading in foreign currencies.

The surge of people trying to sell their gold in Thailand was first reported in April as gold prices recovered after their mid-March sell-off. Sellers said they wanted to get their hands on some much-needed cash during the COVID-19 crisis.

May’s total exports were the lowest in more than 10 years, the commerce ministry said on Wednesday. Excluding gold, exports were down 27.8% on an annual basis.

Exports are not expected to fall much further but a recovery is likely to “take a long time,” ministry official Pimchanok Vonkorpon said on Wednesday. Shipments could be looking at a decline of 5% in 2020, Vonkorpon added. So far this year, total exports are down 3.71%