LONDON (Reuters) - European stocks look poised to make up ground on Wall Street in the second half of 2020 as Joe Biden consolidates his lead over Donald Trump ahead of the November U.S. presidential election and a surge of new COVID-19 cases threatens the U.S. economic recovery.

The U.S. stock market has consistently outperformed Europe since the 2016 election of Trump, which was followed by a rally widely dubbed the ‘Trump bump’.

Fund flows suggest a shift in sentiment. Bank of America’s latest weekly report on Friday showed $6.6 billion left U.S. equity funds, the largest exodus in seven weeks, while $800 million made their way into European ones.

The pan-European STOXX 600 has outperformed world stocks by about 1.5% in the last month, while Wall Street's S&P 500 .SPX has underperformed by the same extent.

Among factors boosting European assets is Europe’s relative success in gradually reopening its economy and the European Union’s proposed 750 billion euro ($841.73 billion) recovery fund to help countries deal with the fallout from the coronavirus crisis.

The spending plan, which could be approved in July, would bring the EU closer to a fiscal union and as such has boosted sentiment and soothed recurrent worries about peripheral euro zone countries such as Italy.

The common currency has risen 4% since France and Germany unveiled a joint proposal for the recovery fund on May 18. 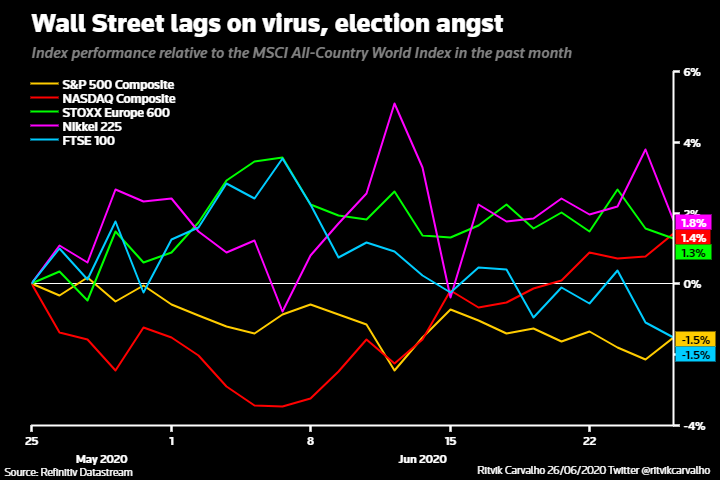 “There’s a very strong re-rating potential for the European market which has long been underinvested and undervalued.”

“We are warming up to European assets as the region steps up its policy response and demonstrates relative success in tamping virus growth,” BlackRock, the world’s biggest asset manager, told its clients on Monday.

Similarly, Goldman Sachs upgraded its rating for Europe to “overweight” for the next three months, citing “a combination of favourable tailwinds”.

Meanwhile, the U.S. newsflow was less favourable, with record COVID-19 infections and jobs data suggesting the labour market could take years to recover.

Opinion polls give Biden a substantial lead over Trump both nationally and in key states, and betting odds currently give the Democrat candidate a 60% chance of winning.

Goldman Sachs said the possibility of a Biden victory - and the possible reversal of Trump’s 2017 tax cuts - wasn’t fully priced into markets.

Given the uncertainty of the race and bearing in mind the surprise win of Trump over Hillary Clinton in 2016, many may choose to stay on the sidelines and wait for the dust to settle.

“European equities may get an edge over their U.S. peers as we get closer to the U.S. election,” Morgan Stanley’s head of cross-asset strategy Andrew Sheets told Reuters.

Reporting by Julien Ponthus and Thyagaraju Adinarayan in London; Editing by Gareth Jones