LONDON (Reuters) - Risk currencies such as the Australian dollar took a breather from recent gains on Tuesday, with investors hitting pause on an China-led equity market rally, as new coronavirus flare-ups and local lockdowns in some countries lifted the safe-haven dollar.

Riskier currencies such as the commodity-driven Aussie, Norwegian crown, the New Zealand dollar and the Swedish crown have rallied strongly since April alongside increased risk appetite in global markets.

But with a blazing run-up led by Chinese equities cooling in other stock markets on Tuesday, surging coronavirus infections in places that are attempting a reopening, and regional lockdowns still being introduced, investors appeared to take their foot off the gas.

Lockdown measures were reimposed in Australia’s second biggest city on Tuesday, confining Melbourne residents to their homes unless undertaking essential business for six weeks, as officials scramble to contain a coronavirus outbreak.

It had no reaction to the country’s central bank leaving rates unchanged.

The index, which measures the greenback against a basket of currencies, breached a key technical indicator this week. Known as a death cross, the chart formation occurs when a measure's long-term 200-day moving average has fallen below its short-term 50-day moving average. It last occurred for the dollar index in December 2019, following which it shed more than 3%. (Graphic: Dollar death cross, here) 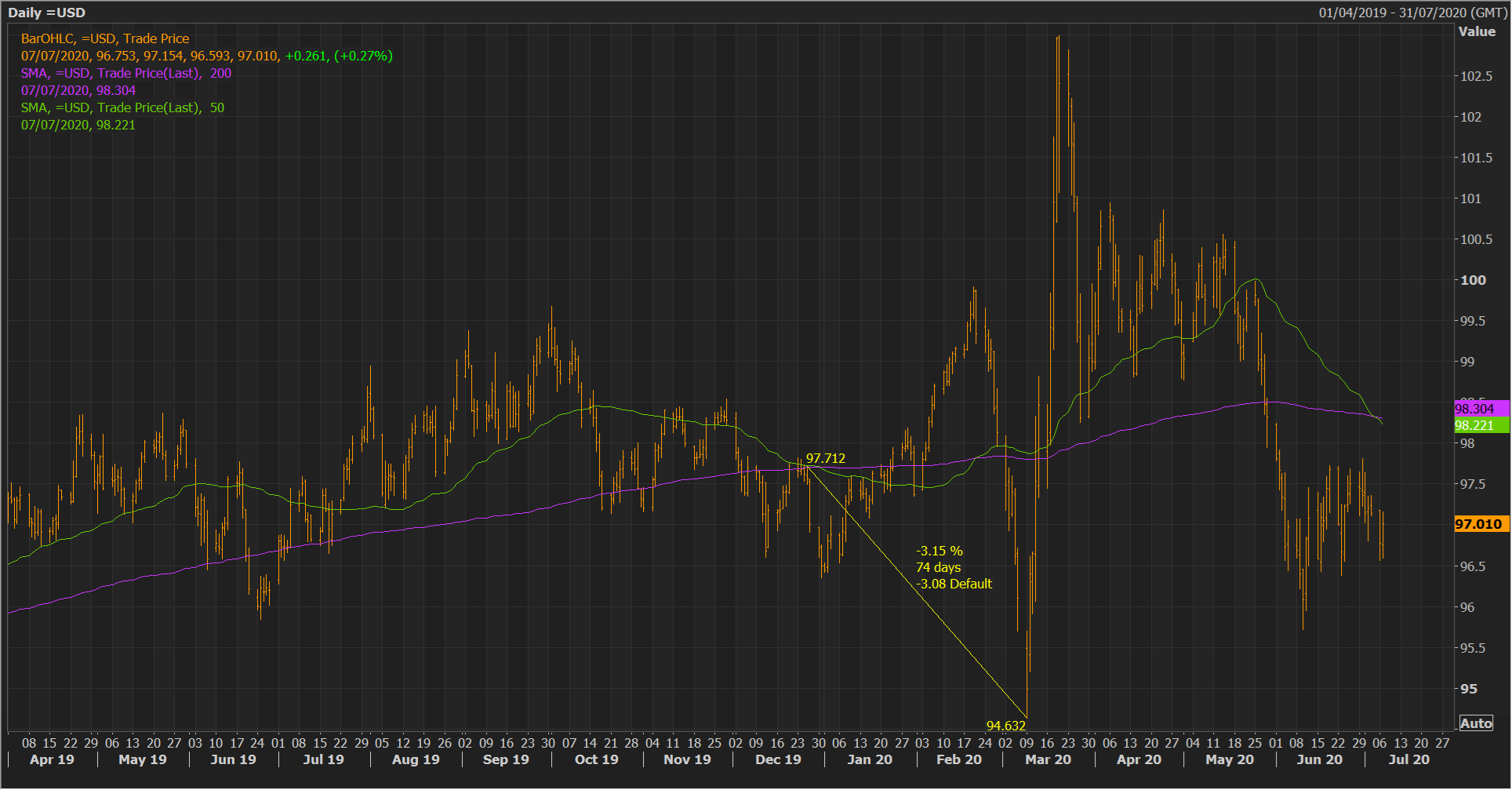 Florida’s greater Miami area became the latest hotspot to roll back its reopening as virus cases surged nationwide by the tens of thousands and the U.S. death toll topped 130,000.

“After yesterday’s strong risk rally - which also drove risky currencies higher - the reality of regional lockdowns in places like the U.S., UK, Spain and now Australia are a gentle reminder that the threat of a second coronavirus wave is one that investors should not be quick to price out,” said Viraj Patel, global FX and macro strategist at Arkera.

Investors are watching nervously as infections surge in the United States and India, but are so far taking the view that more massive lockdowns are unlikely.

A key measure of the market’s long-term inflation expectations in the euro area EUIL5YF5Y=R has risen from record lows hit in March and is close to its highest levels in around 4 months.

“One implication of higher inflation expectations is a further push higher in euro/dollar. The pair made it back above $1.13 yesterday and we think it has further to go in the short term,” said strategists at Danske Bank in a note to clients, adding that they saw the euro reaching $1.15 in 3 months.

The Chinese yuan CNH=EBS picked up where it left off after soaring with runaway Chinese equities on Monday, but pulled back from an offshore top of 6.9965 per dollar as caution crept in.

“If the Chinese stock run extends in the coming days – and barring major swings in global risk sentiment – investors will get the chance to assess the PBOC’s tolerance for a stronger yuan,” ING strategists wrote in a note to clients.

“It is also worth mentioning that the U.S. Treasury FX report is still to be published and...we cannot exclude that China can be labelled a manipulator again if tensions with the U.S. flare up again (the PBOC allowing USD/CNY to move above 7.00 was the trigger for the ‘manipulator’ designation last year).”