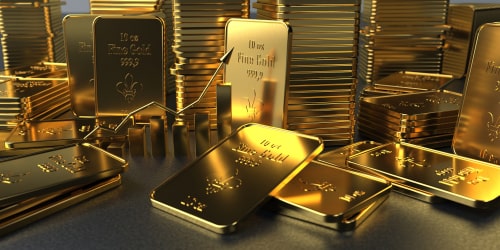 (Kitco News) Gold is rallying for the fifth week in a row and the bullish trend is targeting the 2011 record-highs in USD-terms, according to analysts.

Investors seem to be torn between hopes of an economic recovery and the worrying number of rising coronavirus cases in the U.S., which could slow everything down again.

"Reopening might be not as quickly as people thought. Could see more closures in states like Florida and Texas. Plus, other countries could be more cautious when reopening based on the U.S. experience …. We could see the economy suffer and see lousy numbers into August and September," TD Securities head of global strategy Bart Melek told Kitco News on Friday.

Temporary consolidation around the $1,800 level is not being ruled out by analysts, who said that any dip in prices will be bought as the precious metal ultimately heads higher.

"For now, we might consolidate near the current levels. But the tilt is to the upside. The reason for that is that the economic recovery maybe somewhat slower. The reality is that risk appetite might not move higher forever. And that realization will be solidified and the Fed is going to end up doing more, not less," said Melek. "Gold will consolidate here and move higher."

Gold holding above $1,800 an ounce this week is a very bullish trend, said Gainesville Coins precious metals expert Everett Millman. "We haven't seen these levels in nine years, so I expect that we will test support a few times," Millman said.

Gold prices are heading further north of $1,800 next week, analysts pointed out. "It looks like we are on our way to test those all-time highs around $1,900," said Millman, adding that the new support level for next week is $1,800.

"All of the factors that were supporting gold a year ago are all still present. None have improved or changed. I expect gold to be higher going forward in the second half of 2020," he added.

Another bullish call was issued by FXTM's market analyst Han Tan: "Given subdued U.S. real yields and the stubborn risk aversion in the markets, this is clearly a supportive environment for Gold, with a repeat of the September 5, 2011 record closing price of $1900.20 in its sights."

The next resistance level for LaSalle Futures Group senior market strategist Charlie Nedoss is $1,830. "I am looking for gold to push higher next week. Don't think we'll break the uptrend."

Nedoss said the fear trade is kicking in and new buyers are turning to gold as part of their portfolio diversification during these uncertain times.

"Gold up 15%-16% on the year. It is seeing a resurgence as an asset class. Traditional 60%-40% portfolios are split between stocks and bonds. Now, you are seeing precious metals work their way in. People put more gold into their portfolio mix — just look at the ETFs inflows. What I am gleaning from that is gold is being gadded in portfolios for protection," Nedoss said.

Regarding the macroeconomic data, there is fear building that the U.S. recovery is stalling past June, said Capital Economics senior U.S. economist Michael Pearce.

"A growing range of indicators suggest the economic recovery stalled in late-June and early July, in part because of a resurgence in virus infections. There's clearly a risk that the virus continues spreading unchecked over the coming weeks, pushing the recovery into reverse," Pearce said on Friday.

But it might not all be about the re-infection rate, the economist added, noting that the U.S. might just be entering a new phase of the recovery, which will be "slower and more fitful."

Another key element to pay attention to starting next week is the U.S. earnings season, which could present a bleak picture of the economy.

"While global equities blissfully ignored the deteriorating economic conditions around the world in the previous quarter, the moment of reckoning could arrive when the U.S. earnings season kicks off next week. The second-quarter results are set to lay bare the pandemic's impact to a greater extent compared to the previous quarter's figures and this could prove to be one of Wall Street's worst earnings seasons. It remains to be seen whether market participants have the stomach to digest such despairing numbers," Tan said on Friday.