Is it time to short copper? Metal hits 2-year high this week as analysts turn cautious 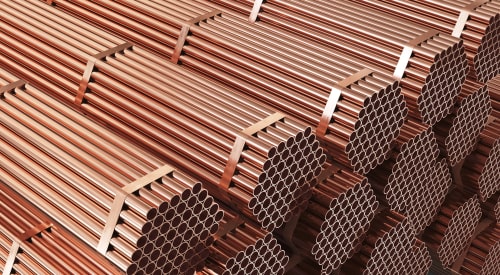 (Kitco News) As many investors pile into copper futures amid an impressive rally, which saw prices hit two-year highs earlier this week, some analysts are now warning about a price reversal.

Prices of the industrial metal hit a two-year high of $6,633 a tonne on Monday, boosted by concerns over strikes and supply from Chile — world’s top copper producer. This marked a gain of more than 50% since touching four-year lows in March when economic activity slumped along with demand.

“After having its best quarter since 2010, copper has surged again in early-June to reach a two-year high just above $6,600/t. The red metal was helped by optimism over a stronger-than-expected demand rebound in top consuming regions like China, the U.S. and Europe, and as the supply side of the equation is coming up short due to COVID-19 mine shutdowns in South America and other regions,” said TD Securities head of commodity strategy Bart Melek.

“With supply constrained and strong China data there is clearly a case for momentum to continue, but we do note that the copper premium in China does look to be easing back. Moreover, copper scrap prices have not matched the recent run-up in refined material. We do expect a further rise in the copper price later in Q3, but feel current levels have run a little ahead of near-term fundamentals,” Hamilton said.

Pressure have been mounting on miners operating in Chile to improve safety measures amid the coronavirus outbreak, which could potentially impact production. Copper production has largely been untouched by the COVID-19 outbreak but recently cases started climbing in Chile. As of Wednesday, Chile had a total of 321,205 confirmed coronavirus cases with at least 7,186 deaths.

Workers at Antofagasta’s Zaldivar and Centinela copper mines in Chile have voted to strike after rejecting pay offers, Reuters reported on Monday.

“For copper, strike action called at Antofagasta's Centinela mine and a weaker dollar failed to give the red metal a further boost. Chinese preliminary trade data for June came largely in line with expectations, but questions remain as to whether the two main drivers that have supported stronger imports of refined metal recently will continue to do so,” they wrote on Wednesday. “For the full year, we are still estimating an average decline of 1.5% in base metals demand from China.”

Some analysts are becoming cautious in their long-term outlook, suggesting that a copper price-reversal could be just around the corner.

Melek projects demand as well as any supply disruptions to normalize, dragging copper prices back down.

“As the pace of demand growth normalizes amid economic and seasonal drivers, and disrupted supply returns to the market, the red metal could be set to revert lower. Indeed, a catalyst such as economic data disappointments with renewed COVID infection worries could send prices toward $5,400/t,” he said. “As such, we are opting to take a tactical short position in copper, expecting prices to revert to a lower equilibrium based on the fundamentals, which include supply, demand, inventories and cost structure.”

Melek explained that the surging demand for copper is likely to only be temporary following a sharp COVID-19-related decline.

“TD Securities model projects that demand will still be lower in 2021 than it was in 2019, with a surplus growing to some 850k t over the next eighteen months. Based on the fundamentals, which include supply, demand, inventories and cost structure, the red metal should average at around $5,600/t not the current $6,500/t,” Melek explained. “Based on recent normal volatility of $1,000/t peak-to-trough from the fundamentally determined levels, copper could easily drop to just below $5,400/t, if not lower.”

Production in other countries, aside from Chile, is also starting to stabilize. For example, Peru, the world’s second-largest copper producer, will see its mines return to 100% capacity by the end of July, the country’s Energy & Mines Minister Susana Vilca said last week.