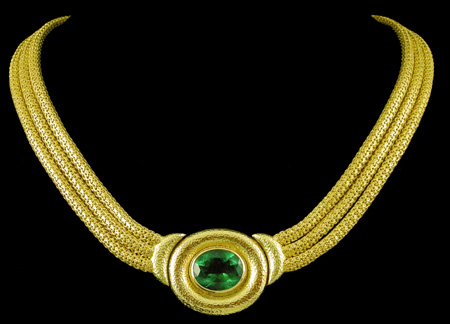 (Kitco News) - The recent rally in gold prices has brought retail customers to their dealers with renewed interest to sell their gold holdings.

One jeweler, in particular, has seen record selling activity in the last week.

Tobina Kahn, president of the House of Kahn Estate Jewelers based in Chicago and Palm Beach, told Kitco News that clients are selling more of their gold possessions than ever before.

“What we’re seeing is a psychological level with $1,900 [an ounce]. After gold broke $1,900, and now we’re surpassing historic levels, that’s what’s causing people to come out with their gold,” Kahn said. “We’re not just seeing four or five pieces at one time, we’re seeing people coming in with 20 to 30 pieces.”

Kahn noted that the clientele have been primarily of an older generation, and in some cases, are bringing in their entire jewelry boxes to liquidate.

“We’re seeing a combination of historic family heirlooms that their great grandmother or great aunt gave to them, their boyfriend of 30 years ago gave to them,” she said. “They all know that gold has gone up, and they do understand that there’s volatility. Back in 2011 when gold was high, people were still saying to themselves, ‘well, let me think about it, gold might go up, let me think about it.’ Now, nobody’s thinking about it, at these levels, they’re making decisions right away, they’re either saying yes or they’re saying no.”

Kahn thinks that intense interest in selling at this time is partly driven by a need to raise cash as a result of the pandemic, coupled with the timing of gold reaching record price levels.

What will bring back interest in buying jewelry is a recovery in the economy that will open up discretionary sectors like entertainment and hospitality, Kahn said.

“For people to want to come in and buy jewelry, what you’re going need to see is the restaurants need to be open, the night clubs and movie theaters need to be open. If the restaurants are only serving 25% capacity, people are not going out, they’re not getting dressed up. So, we’re going to need to see the pandemic dissipate to see people wanting to come in and shop,” she said.

Kahn doesn’t see selling interest from retail clients as an indicator of a topping in gold prices. On the contrary, she said that high prices are here to stay.

“We climbed so quickly in the last couple of days. It’s possible we could come down, but highly unlikely. I think these high values of gold are here to stay,” she said. “I do not believe that we will ever go back down to $1,100 an ounce. When the government can pay back its debt from fiscal stimulus, then gold will be worth a lot less. Until then, I think this is the only game in town.”

While the surge in metals prices has maintained the momentum in retail sales activity for bullion dealers, much of this activity has been fairly balanced in terms of both buying and selling, according to Peter Hug, director of Global Trading at Kitco Metals.

While Kitco customers have been taking profits in their gold holdings, the selling to buying ratio is still in favor of buying gold, Hug said.

He added that there has been relatively less buying in the most recent trading days as gold broke 2011 highs.

“With gold, we’ve seen some significant buying in gold, more in the $1,800 an ounce range. Once gold got over $1,925, which broke the record high of 2011, we have seen participation in the gold market, but it’s been relatively a good two-sided market; there are very few people now that are holding gold that are not at a profit, so we’re seeing some two-sided action with some retail investors taking profits,” he said.

Silver is a different story; demand continues to surge as prices climb higher, to the point where there is now a shortage of silver products, Hug said.

“There are now starting to be more shortages again in certain silver products, specifically silver Eagles, silver Maple Leafs, and 100 ounce bars. The allocation and demand for silver in those three categories has grown significantly since silver broke up through $20 [an ounce],” he said “Some people thought maybe people would be selling silver in the mid-$20s, actually there’s been relatively aggressive buying of silver as the prices moved higher.”

Unlike gold, silver has not yet touched the 2011 highs of $48.58 an ounce, and investors are still chasing the white metal higher.

This shortage in silver products has caused supply issues, but no such issues exist in the gold market, Hug said.

“You’re starting to see shortages and delays in getting silver products out to investors. Some dealers are anywhere from three to five weeks out in delivering products,” he said. “Gold is not an issue. The demand in silver is far outstripping the supply and production capabilities of both the Royal Canadian Mint and U.S. Mint. Gold in the mid $1,900s, even though it’s projected to break $2,000 in the short term and possibly go higher, we’re not seeing the same investment offtake in gold at $1,950 and mints seem to be able to produce enough gold.”

On premiums, gold is still trading above pre-COVID levels, although it is normalizing, while silver premiums are starting to rise again.

“This new demand cycle from the retail investors chasing silver up over $20 has created a situation, because of the supply not meeting demand, where the premiums are starting to edge up again on the physical silver products,” he said.