(Reuters) - Four of the United States’ big tech firms, accounting for nearly a fifth of the S&P 500’s total value, report results on Thursday on the heels of a bruising Congressional hearing to look into alleged abuse of their global dominance.

It will be the first time Apple Inc, Amazon.com Inc, Alphabet Inc and Facebook Inc post financial results on the same day and investors wonder if they can deliver enough to extend a rally that has been central to Wall Street’s recovery since March.

Deemed “stay-at-home” winners as millions of Americans were ordered indoors to contain the COVID-19 pandemic, shares in the big tech players have scaled record highs at a time when the benchmark S&P 500 is up less than 1% on the year.

But with many of Apple’s stores still closed and Amazon’s e-commerce costs soaring, there are question marks, and some on Wall Street argue that stock prices for all four have been bloated beyond rational valuations.

Shares in Microsoft Corp fell 4.4% the day after its report last week despite better-than-expected cloud revenue, and its stock is now nearly flat on the month after hitting an all-time high in early July.

“It’s simply momentum,” Leo Kelly, founder of Verdence Capital Advisors, told the Reuters Global Markets Forum ahead of the results, due after the closing bell.

“When you have stocks looking like they’re moving into a bubble, what you don’t know is how far it will go. You can’t just look at valuation and say ‘it’s going to fall.’ It can go anywhere and the risk is becoming extremely, extremely high.” 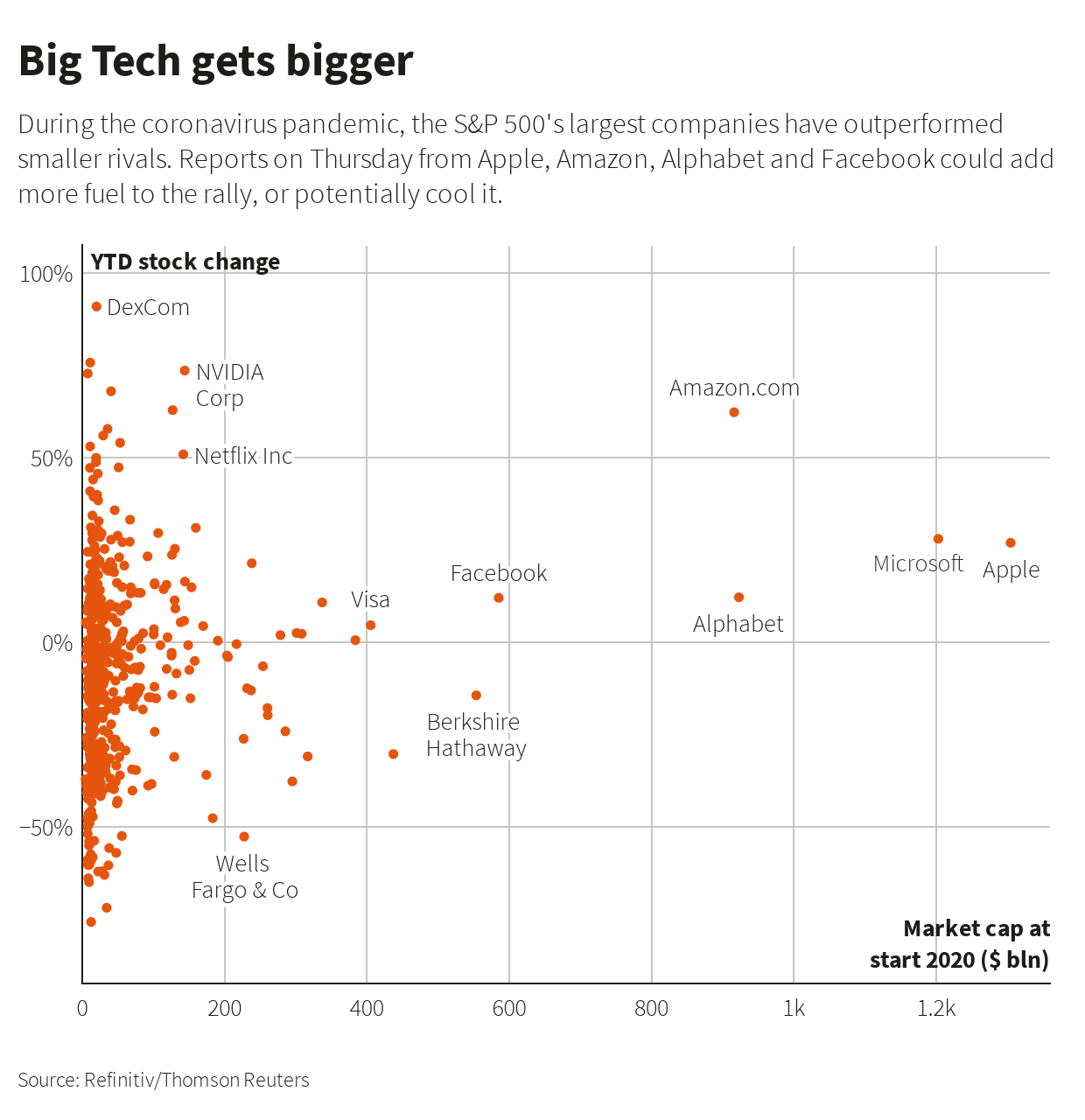 Alphabet’s Google and Facebook took particularly sharp jabs on Wednesday from Democrats and Republicans who say they have crippled smaller rivals in the quest for market share, the latest blows in an increasingly threatening regulatory landscape.

Amazon rose about 1% on Thursday, while Apple, Alphabet and Facebook were close to unchanged.

Apple’s headache is a slowdown in hardware sales as the world slides into recession, with analysts predicting pandemic disruptions will reduce revenue about 3% and depress the iPhone business by nearly 14%.

Similarly, Facebook and Google are contending with a collapse in marketing spending. Refinitiv analysts estimate Facebook could generate its slowest revenue growth - around 3% - since it became a public company.

Despite the stock surge raising the specter of another tech bubble, with Amazon up 64% this year and the others up between 13% and 29%, investors are betting the deep-pocketed companies will emerge from the coronavirus crisis stronger than their smaller competitors.

“Even the bears will say that these are fantastic companies and they are not going to stop being fantastic,” said Nicholas Colas, co-founder of DataTrek Research.

“The unifying factor is they have the ability to both grow and control their cost structures through the pandemic. That is always a good place to start from when you have a downturn.”