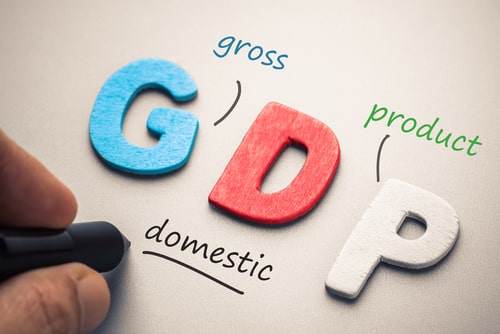 The advance estimate of the second-quarter gross domestic product showed that the U.S. economy contracted at an annual rate of 32.9% versus the expected 34.1%, the U.S. Commerce Department said on Thursday. This comes after real GDP decreased 5% in Q1.

Gold prices edged down slightly after the data was released with December Comex gold futures last trading at $1,964.10, down 0.64% on the day.

The Q2 record contraction was due to “the response to COVID-19, as ‘stay-at-home’ orders issued in March and April were partially lifted in some areas of the country in May and June, and government pandemic assistance payments were distributed to households and businesses. This led to rapid shifts in activity, as businesses and schools continued remote work and consumers and businesses canceled, restricted, or redirected their spending,” the report said.

On the inflation front, the PCE price index fell 1.9% in Q2 compared to a rise of 1.3% in Q1. Core PCE, which strips out volatile food and energy prices and is the Federal Reserve’s preferred inflation metrics, decreased 1.1% compared to an increase of 1.6% posted in the prior quarter. The core measure was below analysts’ expectations of an advance of 1%.

“The 32.9% annualized dive in real GDP was a bit less severe than expected, but captured a wide swath of the economy that was shuttered by a public health crisis, as well as what might have been an unsustainably quick reopening. Households had money to spend, as government benefits lifted incomes sharply, but the savings rate jumped to over 25% as so many avenues for spending were restricted. Business investment wasn’t quite as weak as we expected, but unlike households, we don’t see as much pent up demand there given slack in the economy. For consumers, government decisions over extended benefits, as well as the control of the virus needed to keep retail and service outlets open, will be key,” Shenfeld said.