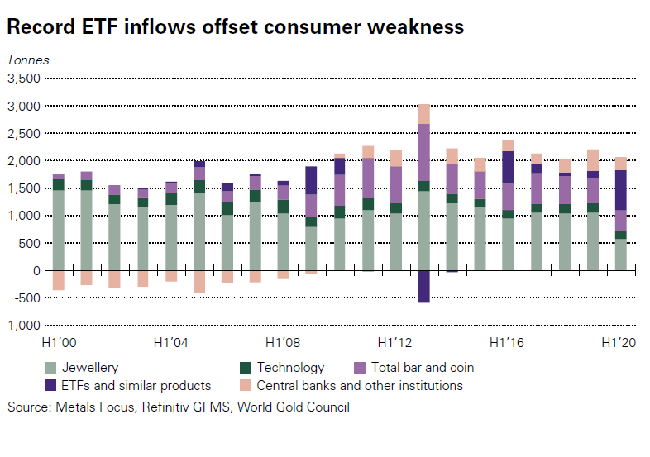 (Kitco News) - Record investment demand remains the dominant theme for gold and highlights a growing duality in the marketplace, according to the latest research from the World Gold Council (WGC).

In its Gold Demand Trends for the second quarter, the WGC said that investment demand in gold-backed Exchange-Traded Products (ETFs) offset across-the-board declines in physical metal demand between April and June. The report said that in total, physical gold consumption dropped to 1,015.7 metric tons, down 11% compared to the second quarter of 2019.

“The COVID-19 pandemic was again the main influence on the gold market in Q2, severely curtailing consumer demand while providing support for investment. The global response to the pandemic by central banks and governments, in the form of rate cuts and massive liquidity injections, fueled record flows of 734t into gold-backed ETFs,” the analysts said in the report.

Looking at the second quarter data, the WGC said that global gold ETFs saw inflows of 434 tons of the precious metal, almost matching the Q1 2009 quarterly record of 465.7t reported during the height of the Global Financial Crisis. The value of gold held in ETFs rose to a record $205.8 billion in the first half of the year, the WGC added.

“First half inflows surpassed the 2009 annual record of 646t and lifted global holdings to 3,621 tons,” the analysts noted.

The analysts said that gold in the second quarter is an attractive safe-haven asset for investors looking for a risk-hedge against market uncertainty, unprecedented monetary policy action, and low interest rates. Gold’s significant momentum as prices rose 17% in the first half of the year was also a critical factor in attracting new investors.

However, Investment demand was pretty much the only bright spot for total gold consumption in the second quarter.

The WGC said that in particular, Thailand was the biggest contributor to the annual decline in bar and coin investment in the second half. Consumers sold their gold en mass as the economy was ravaged by the COVID-19 pandemic, according to the report.

“Job losses and lower income levels at a time of rapidly rising gold prices prompted a surge of disinvestment as Thai investors used their gold holdings to fund their financial needs,” the analysts said.

Although important eastern markets saw weak coin and bar demand, Western nations had an insatiable appetite for the physical metal. The WGC said that coin and bar demand in the U.S. rose to 13.8 tons in the second quarter, more than quadrupling demand from 2019.

European investors bought total of 137.4 tons of bars and coins in the first half of the year, the highest level in a decade, the WGC said.

“Lockdown restrictions shuttered many markets, and consumers faced the challenging consequences of economic downturn at a time when gold prices were moving from strength to strength, making affordability an issue for many,” the WGC said.

The two biggest gold consuming nations both saw a significant drop in jewelry demand. The WGC said that Indian jewelry demand saw an annual drop of 74% to 44 tons. At the same time, China saw jewelry demand drop 33% to 90.90 tons.

In the U.S. the WGC said that jewelry demand fell to its lowest level on record in the second quarter to 19.1 tons

“Store closures due to COVID-19 were the clear reason for the decline, which was all the more severe for the fact that lockdown encompassed Easter and Mother’s Day, both of which traditionally see a marked increase in footfall to jewelry stores,” the analysts said.

Central bank gold demand, another important pillar in the gold market, dropped 50% in the second quarter to 114.7 tons. Although central banks remain net gold buyers, the pace of those purchases has slowed significantly, the WGC said.

“Buying has become more concentrated, with fewer banks adding to reserves so far in 2020,” the analysts said. “We expect central banks to remain net purchasers in 2020, but in volumes below those of the two preceding years.”

“Strict coronavirus lockdowns in key mining nations throughout H1 were the main cause of the decline,” the WGC said.