LONDON (Reuters) - Global shares fell on Thursday as the Federal Reserve’s pledge to use all its tools to support the U.S. economy failed to reassure investors uneasy about a stalemate on fiscal support and rising coronavirus cases.

In Europe, dismal earnings reports and weaker-than-expected German GDP data added to the sour mood, with the STOXX 600 slipping 1.6%. Earlier gains in Asian shares were undone, with MSCI’s broadest index of Asia Pacific shares outside of Japan .MIAPJ0000PUS flat.

Investors were worried about a surge in virus cases in the United States, along with parts of Europe and Asia. Australia, India, Vietnam, and North Korea were all on high alert.

On Wednesday, all Fed members voted as expected to leave the target range for short-term interest rates between 0% and 0.25%, where it has been since March 15, when the virus was beginning to hit the nation.

The unchanged policy setting together with a pledge the Fed would use its “full range of tools” if needed boosted risk appetite overnight. All three Wall Street indexes closed higher. 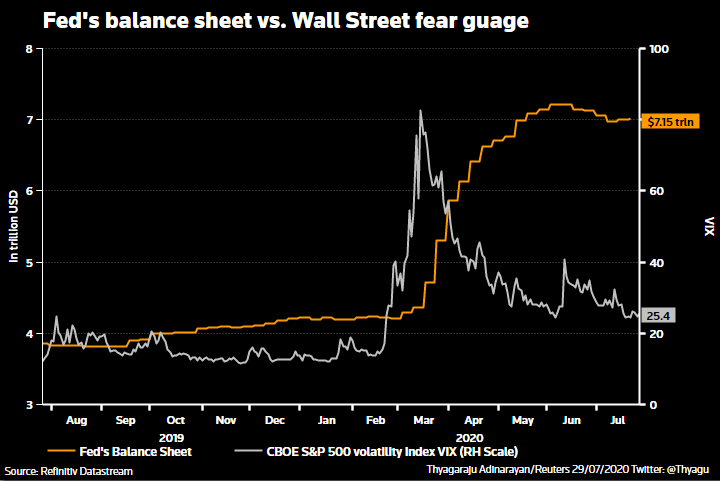 But the Fed was already disappearing in the rear-view mirror on Thursday. Investor focus returned to negotiations over a new coronavirus relief package for the world’s largest economy.

U.S. President Donald Trump said on Wednesday that his administration and Democrats in Congress were still “far apart” on a new coronavirus relief bill. A failure to agree risks letting a $600-per-week unemployment benefit lapse when it expires this week.

“Were that program to expire completely, it’s a meaningful hit to the economy and thus to sentiment and risk appetite,” said James Athey, investment director, Aberdeen Standard Investments.

“At these equity prices there is absolutely no margin baked in. They are priced for utter perfection. Hence a little unease.”

In currencies, the dollar index recovered after slumping to 93.17, the weakest since June 2018, but remains on course for its worst monthly performance in a decade. [USD/]

The dollar =USD has fallen on expectations the Fed will maintain its ultra-loose monetary policy for years to come and on speculation it will allow inflation to run higher than it has previously indicated before raising interest rates.

The dollar's weakness has supported the euro EUR=EBS, which is headed for its biggest monthly gain in 10 years, having risen about 5% so far this month. It was last down 0.3% at $1.1755.

The risk-sensitive Australian dollar AUD=D3 slipped 0.6% to $0.7148 after reaching its highest levels since April 2019.

Reporting by Tom Arnold in London and Swati Pandey in Sydney; Editing by Larry King and Mark Potter