Gold's historic rally is a sign that the U.S. dollar’s reign as reserve currency is in question, says portfolio manager 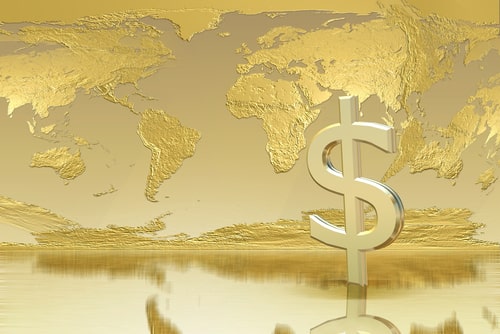 (Kitco News) This summer's massive gold price rally could be a sign that the market is losing confidence in the U.S. dollar as the world's reserve currency, according to Horizons ETFs portfolio manager Nick Piquard.

“The rally is telling investors that the financial system with the U.S. dollar as the reserve currency, [might need] some changes,” Piquard told Kitco News last week.

Global debt and unlimited money printing are deteriorating the confidence in the U.S. dollar as the global reserve currency.

“The U.S. dollar system has worked so far. But we're getting to the point where there's so much debt in the world and with this new crisis, there’s even more debt,” Piquard explained. “People are figuring out that maybe they will have to make some changes to how the U.S. dollar acts as a reserve system. The U.S. is probably going to have to print a lot of dollars to bail out all this debt. That’s really fuelling the gold rally.”

The market is also realizing that higher gold prices are inevitable due to the situation the Fed and the U.S. government have been forced into.

“Investors are seeing that this COVID crisis isn't going to go away anytime soon. The cases keep going up globally. And the longer it takes, the more debt needs to be created,” Piquard said. “Congress is debating right now about how many trillions of dollars they're going to have to spend for a new stimulus after having already spent trillions of dollars.”

And even once the COVID crisis is behind us, the economy is going to be weak for a while, Piquard pointed out.

“After all that money has been spent, it's not like you're going to be able to raise taxes to get that money back, or it's not going to be easy to raise rates,” he said. “The market is anticipating that the Fed is going to have to do more. And all those things are just beneficial for gold.”

The Federal Reserve cannot just go back to normal. “That will just be negative for everyone. Nobody really wins in that scenario,” Piquard noted.

The gold bulls believe in the inflationary argument that sees the Fed intervening and not letting deflation take over.

“All the Fed needs to do is buy what is being sold. And that's kind of what they've done,” Piquard said. “They’ve been buying bonds first. Now, they're saying they're going to buy corporates. Central banks around the world have already been doing this. The Japanese have been buying stocks for who knows how long, the Swiss central bank has been buying stocks.”

Based on the inflationary scenario, the Fed will continue to intervene, print more money and weaken the U.S. dollar. “That's positive for gold, which is the only asset that you can't print,” Piquard said.

Inflation doesn’t even need to go much higher, the portfolio manager added. “All we need is for rates to be extremely low for extremely long and for inflation to be a little bit higher. As long as as the real yields are negative, that is good for gold.”

How to tell the gold price rally is over

The gold market has not seen its top yet with more upside potential still ahead of the precious metal, Piquard stated.

One major sign of a market top in gold is silver prices catching up and hitting their all-time highs of $50 an ounce.

“Silver price generally makes new highs towards the end of a gold bull market,” Piquard said. “The reason for that is because silver is more of an industrial metal, which is used more in the economy. So when silver starts rallying, that implies that the economy might be picking up.”

So far, silver has risen but it is still significantly below its record highs. At the time of writing, September Comex silver prices were trading at $24.365, up 0.62% on the day.

“Gold has made new all time highs and I think we need silver to reach its old highs as well. Then, there might be an indication that the economy's doing better. Once we see silver catching up, then maybe it's a sign that the bull rally has less room to go,” Piquard said.

Another sign of a market top is the economy recovering and the Fed’s 2% inflation target being breached on a sustainable basis. “The Fed said they're only going to raise rates once inflation recovers above their 2% benchmark. That that could take some time — a year or more,” Piquard noted.

In this very competitive market, gold miners present an interesting buying opportunity, according to the portfolio manager.

“In terms of relative value, miners offer good [deal]. At over $1,900 an ounce, most miners are making money. Miners are significantly below the prices that they were at back in 2011,” he said. “Not all miners are equal but if you buy a portfolio of them, they offer more margin of safety because even if gold goes down a little bit, they're still making some money.”