Be careful what you wish for: Would a gold standard trigger gold confiscation?

The U.S. dollar has been on a downward trend recently and many analysts, including those from Goldman Sachs, are warning that the U.S. dollar is at risk of losing its global currency reserve status. There are “real concerns around the longevity of the U.S. dollar as a reserve currency,” Goldman said in a report last week.

Gold, on the other hand, has been on a very bullish uptrend, continuing to hit new all-time highs above $2,000 an ounce almost on a daily basis this week.

As the great American money printing machine churns out more and more dollars, would a gold standard help the situation?

Analysts and commodity experts are in a heated debate over the topic. But there is a major unknown in the equation — would gold confiscation be a part of the deal?

Let’s start from the beginning. The gold standard was adopted by the U.S. in 1879. The period between 1879 and 1914 is known as the so-called classical gold standard era, during which one ounce of gold would represent $21.

Things got a little more complicated from there. In 1933, Franklin D. Roosevelt used the authority granted to the president by the Trading with the Enemy Act to ban gold ownership in the U.S. More specifically, all U.S. citizens were required to sell their gold coins, gold bullion, and gold certificates to the Federal Reserve in exchange for $20.67 per ounce, which was below market value. This is known a Roosevelt's Executive Order 6102. Important exception was made for rare coins: “Gold coin and gold certificates in an amount not exceeding in the aggregate $100 belonging to any one person; and gold coins having a recognized special value to collectors of rare and unusual coins,” the order stated.

After this, the price of gold was raised to $35 an ounce and remained fixed until 1971, when Richard Nixon put a halt on the U.S. dollar’s convertibility into gold, which meant that other countries could no longer redeem dollars for gold. Finally, in 1973 Nixon scrapped the gold standard.

Pro-gold actions followed, including the 1974’s decision to repeal Roosevelt’s Executive Order to nationalize all privately-owned gold, which restored the U.S. citizens’ right to own gold. Then in 1977, the president’s authority to control gold transactions during a period of national emergency was removed, aside from during a time of war.

However, the Trading with the Enemy Act is still in force, which is where most of the confusion and fear that gold confiscation could be back comes from.

The experience with gold confiscation is not unique to the U.S. either. Some other famous cases included Australia’s 1959 law that allowed gold seizures from private citizens and the U.K. private gold ban of 1966, which was lifted only in 1979.

So, this leads us into our hypothetical scenario — if the U.S. were to go back to the gold standard in some shape or form, would there be a confiscation of privately-owned gold?

Analysts were divided on the subject, but the majority did not seem to rule it out.

“There would have to be some type of gold confiscation. If you back the money with gold, you really can't allow people to openly trade that monetary asset. Jewelry would be fine and I'm sure you would see lots of people trying to melt down their gold and turn it into jewelry if there was another gold confiscation,” Gainesville Coins precious metals expert Everett Millman told Kitco News. “And it's not even just the U.S. I've also heard some rumours about the potential for that to happen in Europe. The idea is popping up more and more now.”

Some kind of controls, including some form of confiscation, would be required, said Horizons ETFs portfolio manager Nick Piquard. “If you go back to the gold standard, gold becomes your money and you need to control gold,” Piquard told Kitco News.

At the end of the day, it depends what kind of policy the U.S. government hypothetically adopts, noted TD Securities head of global strategy Bart Melek.

“Would gold confiscation be part of it like in the 1930s? It doesn't have to be. The government can use whatever reserves it has at Fort Knox — take the obligation, divide it and set a price,” Melek said. “It depends what policy would be like. If policy didn’t want people controlling the money supply, then that's something that it might want to do, [especially if you think] that private agents could mess the pricing up.”

Important to keep in mind though that central banks are only independent as far as legislation allows it, which means that changes to the rules are not out of the question. “If tomorrow the Congress passes a new Federal Reserve Act and decides that the Treasury Department controls the Fed, there goes its independence,” Melek explained.

Setting the price of gold

Aside from the issue of confiscation, the other big question is just how high to set the gold price to make the gold standard workable in the current environment?

Piquard stated that gold would need to be five times higher from where it is today. “From that perspective alone, it's not practical,” he said.

Millman noted that gold could be priced as high as $5,000 an ounce. “That would basically just be to represent that the dollar is being devalued,” he said.

One of the more bullish calls was made by the best-selling author Jim Rickards. “If you are going to have a gold standard, or even use gold as a reference point for money, the implied, non-deflationary price is $15,000 an ounce,” Rickards told Kitco News.

Here’s his calculation: “If you just took the money supply of the Federal Reserve, European Central Bank, Bank of England, Bank of Japan and People’s Bank of China (that’s over 75% of global GDP) divide that number by the official gold [reserves], which are about 34,000 metric tons, you come to $15,000 an ounce.”

During the gold standard days, the United States Department of the Treasury had to set the price of gold higher as well, raising the level to $35 an ounce from $20.67 an ounce back in 1934.

Would a gold standard even work?

The idea of the gold standard is treated by the mainstream forces as an extreme one, but maybe it shouldn’t be, said Millman.

“That's one of the more fascinating topics. Outside of someone like the Federal Reserve nominee Judy Shelton, it's basically treated as a ridiculous idea. But even though it's unlikely, we're closer to it than we've been since 1971,” he said. “It may not be a perfect system, but it's probably better than what we have now.”

The gold standard could even potentially work with today’s economy, Millman pointed out.

“I don't think it's a completely far-fetched idea. What a lot of people don't remember is that the gold standard allowed you to exchange dollars for gold directly. But they could print more dollars than what was being held in the gold reserve. The reserve had to back up only 40% of the dollars that were out in circulation. I don't see why we couldn't do something similar to that today,” he said.

However, this is just one side of the argument. Many analysts believe that there is a very good reason why the U.S. has abandoned the gold standard in the 1970s.

"There is very little probability that the U.S. would seriously consider the gold standard. That would certainly interfere with the Fed's ability to print trillions of dollars and support the market. It'd be an absolute problem for a central bank that wants to do QE [quantitative easing] or that wants to fund government,” Melek said.

The biggest problem with the gold standard back in the day was the difficulty of controlling the supply of gold.

At the end of the day, it comes down to which system is better at dealing with fluctuations in the economic cycles, he noted.

Imagine if the Fed did not intervene in March with trillions of dollars worth of funds to support credit markets, asked Melek. “In Q2, the U.S. GDP dropped 32%. Well that might have been 40% in Q2 and another 40% in Q3 if the Fed didn’t step in,” Melek explained. “It’s not going to be free. We were going to pay for it, most likely through inflation and erosion of assets.”

This is why central banks started to use monetary policy — to smooth out economic cycles by controlling inflation through interest rates, Melek added.

And even though going back to the gold standard is an unlikely scenario, it is possible that the global economy will see a shift away from the U.S. dollar, he noted.

Piquard also said that the more likely outcome is not a gold standard but a new reserve currency. “What we're seeing now is that the U.S. dollar reserve system is not working. There are not enough U.S. dollars right now for all the debt that we've created,” he stated. “This puts the Fed in a really tight spot and going back to what we used before, is not going to help.”

What Piquard envisions for the future is something along the lines of Special Drawing Rights (SDR), which are supplementary foreign exchange reserve assets maintained by the International Monetary Fund (IMF). The SDR is pegged with a basket of currencies, including the U.S. dollar, the euro, Chinese yuan, Japanese yen, and pound sterling.

“That might be a better reserve system because it would potentially spread out the risk and take some of the weight off the U.S. dollar,” Piquard said. 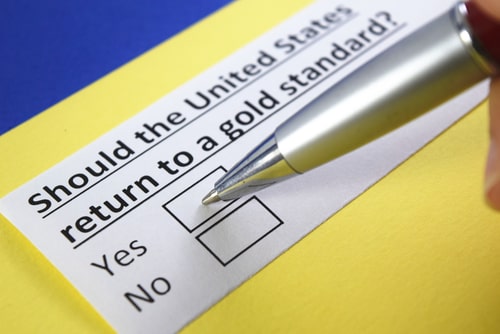 One of the reasons why Trump’s Judy Shelton nomination to the Federal Reserve is so controversial is because of her views on the gold standard.

Back in 2009, she began an op-ed in the Wall Street Journal with the words: “Let's go back to the gold standard.” She continued: “… a gold standard stands in the way of runaway government spending.”

In it, Shelton argued for “reliable store of value across borders and through time,” explaining that “it’s entirely reasonable to ask whether this might be better assured by linking the supply of money and credit to gold or some other reference point as opposed to relying on the judgment of a dozen or so monetary officials meeting eight times a year to set interest rates.”

At one point, U.S. President Donald Trump also spoke about the gold standard, commenting on the issue back in 2016 in a GQ video interview prior to his election. In the interview, he stated: “Bringing back the gold standard would be very hard to do—but boy, would it be wonderful. We’d have a standard on which to base our money.”

Current Fed Chair Jerome Powell commented on the gold standard recently as well, pouring some cold water on the idea and providing a very contrasting view to that of Shelton’s.

“If you assigned us to stabilizing the dollar price of gold, monetary policy could do that, but other things would fluctuate,” Powell said during his semi-annual testimony before the House Committee on Financial Services last year. “This is why every country in the world abandoned the gold standard some decades ago.”