(Reuters) - The S&P 500 and Dow rose on Monday, as investors rotated into value stocks from heavyweight tech-related names while they awaited news on progress in a fiscal support bill for the country’s battered economy.

The Nasdaq .IXIC, which hit a record high every day of last week, was dragged lower by Microsoft Corp (MSFT.O), Amazon.com Inc (AMZN.O) and Facebook Inc (FB.O). The Dow was up 1.1% and touched a more than five-month high.

Value stocks, which tend to outperform growth coming out of a recession, have gotten a lift in recent days. The Russell 1000 value .RLV index rose 0.9% on Monday, while the Russell 1000 growth .RLG index slipped 0.6%.

So, “I’m looking at this more of a correction in growth stocks as opposed to just a correction” in the market.

Bets on a potential coronavirus vaccine, historic fiscal and monetary support, and more recently, a better-than-expected second-quarter earnings season have brought the S&P 500 close to its February record closing high.

U.S. Treasury Secretary Steven Mnuchin, in an interview to CNBC on Monday, said the Trump administration and Congress could reach an agreement as soon as this week if Democrats are “reasonable.” 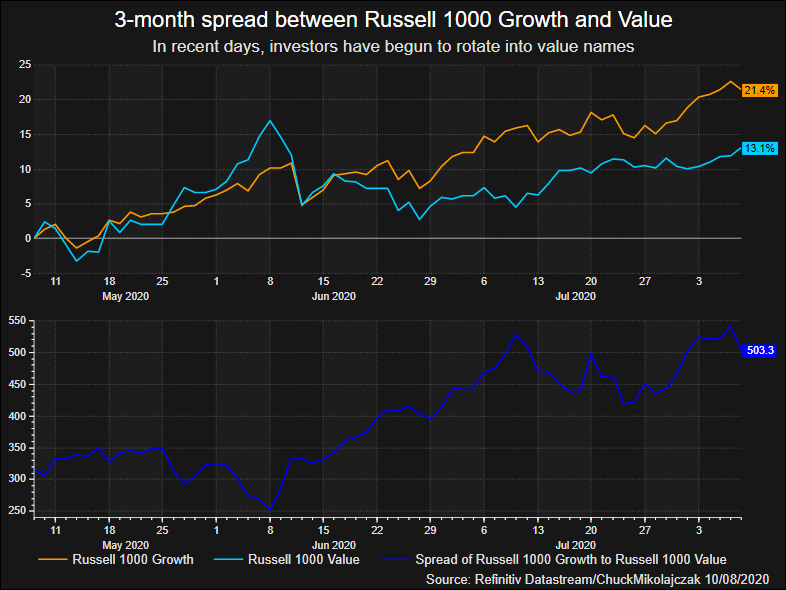 Among individual movers, Eastman Kodak Co (KODK.N) sank after its $765-million loan agreement with the U.S. government to produce pharmaceutical ingredients was put on hold due to “recent allegations of wrongdoing.”

Microsoft Corp (MSFT.O) fell as sources said its bid to carve out parts of TikTok from its Chinese owner ByteDance will be a technically complex endeavor.

Advancing issues outnumbered declining ones on the NYSE by a 2.51-to-1 ratio; on Nasdaq, a 1.60-to-1 ratio favored advancers.