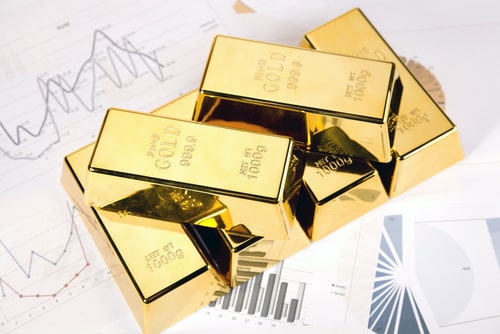 (Kitco News) Gold had a very quiet but downbeat session with prices trading near $1,950 an ounce for most of Thursday.

The downtrend in gold began to accelerate on Wednesday after the Federal Reserve’s July meeting minutes signaled a lack of interest in capping bond yields and contained no new information about a new type of guidance on interest rate expectations.

“The Fed wasn’t as dovish as people wanted. You saw a rally in the dollar, which was a rally from the bottom. Downtrend is resuming now,” LaSalle Futures Group senior market strategist Charlie Nedoss told Kitco News on Thursday. “The downward pressure on gold has been the perception that interest rates are moving higher. I don’t subscribe to that view.”

“The correlation between dollar and gold has been interesting. Both, the U.S. dollar and gold were perceived as safe havens at the beginning of COVID-19. But now they have gone completely inverted. The dollar is fighting off its two-year lows. Gold is the first asset to decline because of the strength of the dollar,” Streible told Kitco News.

The U.S. dollar index (DXY) climbed after the release of the Fed minutes, kicking off its rebound from two-year lows. At the time of writing, the index was trading at 92.77, down 0.12% on the day.

If the DXY can remain below 93, gold has a chance to start moving higher, Nedoss pointed out. “If the dollar starts to consolidate here and the index holds under 93, gold will work itself back up. Keep your eye on the U.S. Treasuries,” he advised.

A strong U.S. dollar is not going to bode well for the metals but it is important to keep in mind that the dollar can rebound while still being in an overall downtrend, noted RJO Futures senior commodities broker Daniel Pavilonis.

“The thing about the dollar is it sold off so much, it wouldn’t be out of the realm of possibility to see a recovery,” Pavilonis told Kitco News. “Another aspect of the U.S. dollar move higher is the emerging markets energy producers having dollar-denominated loans. As they are trying to pay them back, there is a shortage of USD, which should push the market higher.”

The 20-year bonds auction also had an effect on gold, just like the 30-year auction the week before, Pavilonis said.

“Gold is waiting to see what happens,” he stated. “Ultimately, rates will continue to go down which should push the metals higher. The longer gold stays at current level without making new lows, the better it will be for prices. If you are going to buy here have a stop.”

Going forward, comments from the Fed as well as news on the U.S. stimulus deal are the key drivers to watch, added Pavilonis. “Ultimately, we are looking for that printing press to continue and the Fed to keep on pushing that yield curve lower and lower,” he said.

Every time the Democrats and the Republicans get closer on some portion of the relief package, the volatility in the U.S. dollar and gold increases, added Streible.