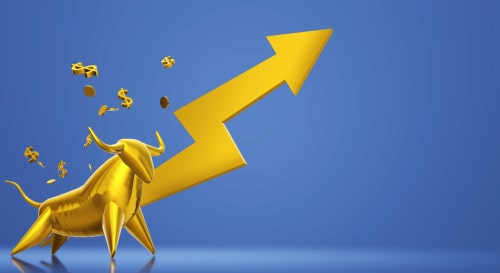 (Kitco News) Gold's upward price trajectory is likely to accelerate, according to Bloomberg Intelligence, which sees substantial gains in store for gold once the U.S. dollar and equities enter their bear markets.

“Gold's upward price trajectory is more likely to accelerate, in our view, led by increasingly favorable macroeconomic fundamentals and moving beyond the extended period of disdain for the metal in 2013-18,” Bloomberg Intelligence senior commodity strategist Mike McGlone said in his August update. “When bear markets in the dollar and equities arise, gold will gain substantial tailwinds.”

After breaching the 2011-high of $1,920 an ounce and hitting new record highs this summer, the gold bull run has not gone too far.

“Gold is in the early days of resuming the bull market that started about 20 years ago, in our view,” McGlone wrote. “The financial crisis and inception of central-bank quantitative easing (QE) accelerated the metal's upward trajectory then, and we see parallels that are likely more enduring this time.”

There is a good chance for gold to even reach $3,000 an ounce during this bull run, according to Bloomberg Intelligence charts.

“Our graphic depicts the potential upside in spot gold toward $3,000 an ounce vs. about $1,770 on June 26, if simply following the trajectory of the G4 central-bank balance sheet as a percent of GDP. Central banks essentially printing money to spur inflation is a solid foundation for the benchmark store of value,” McGlone said. “Gold bottomed at about $700 in 2008 and peaked near $1,900 in 2011. A similar-velocity 2.7x advance from this year's low-close near $1,470 would approach $4,000 by 2023.” 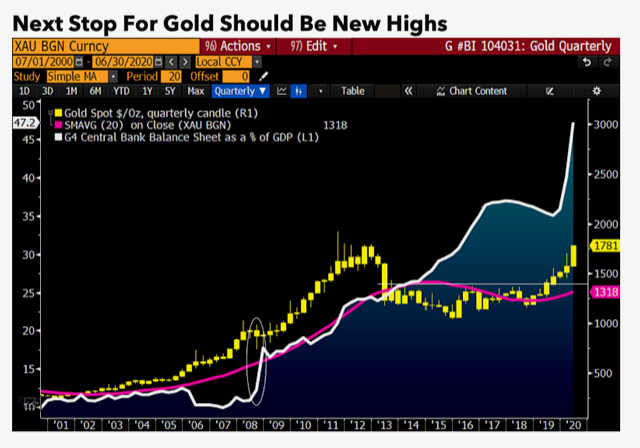 A sign of a failing bull run would be a drop below $1,600 an ounce level on a sustained basis, noted McGlone.

The outlook for the second half of the year is gold versus everything else, according to McGlone.

“There little to suggest gold will lose its top spot on our metals-sector performance dashboard. What's notable as 1H wraps up is that the benchmark precious metal is up almost 16% in 2020 despite an advance of about 5% in the trade-weighted broad dollar. This indicates divergent strength in gold. It's gaining vs. virtually all assets, and most currencies are declining in value vs. the metal. This makes sense in an environment of unparalleled global central-bank quantitative easing,” he stated.