NEW YORK (Reuters) - The dollar dropped to a two-week low against the yen on Tuesday on expectations the Federal Reserve will maintain its downbeat stance on the U.S. economy as it grapples with the COVID-19 pandemic, and keep U.S. interest rates near zero for some time.

The Fed begins a two-day meeting on Tuesday and analysts expect the U.S. central bank to affirm its current zero-interest-rate policy over the next three years, a view that could further weigh on the dollar.

Analysts do not expect a rate hike view from the Fed on Wednesday, but if it does happen, that could be a positive for the dollar.

“The big story for tomorrow would be a 2023 rate hike on the dots,” said Greg Anderson, global head of FX strategy at BMO Capital Markets in New York.

“What we’d hope to see is that the Fed projects no rate hikes for 2023. If they put a rate hike in there, equities and commodities would sell off and the dollar would rally,” he added.

A break below 105.20 yen could pave the way for further technical selling, analysts said.

“The U.S. central bank will be wary of uncertainty the U.S. presidential election will bring with it and wouldn’t want to cause unnecessary turmoil in the financial markets,” said Fawad Razaqzada, market analyst, at ThinkMarkets.com in London.

The dollar index was little changed at 93.062 =USD, as the greenback recovered somewhat after the euro reversed earlier gains.

Earlier, the euro gained after the ZEW economic sentiment survey showed investor sentiment in Germany rose in September, despite headwinds from Brexit and rising coronavirus infections.

The euro along with commodity-linked currencies such the Australian AUD=D3 and New Zealand dollars NZD=D3 gained after positive Chinese data overnight.

That pushed the Chinese yuan to its highest since May 2019 against the dollar CNH=EBS, which was last down 0.4% at 6.779 yuan in the offshore market.

“What’s driving both equities and the dollar is a combination of ample liquidity provision by the Fed and part of it is rising optimism for a vaccine and the global recovery,” said BMO’s Anderson.

For a graphic on Chinese data bounce: 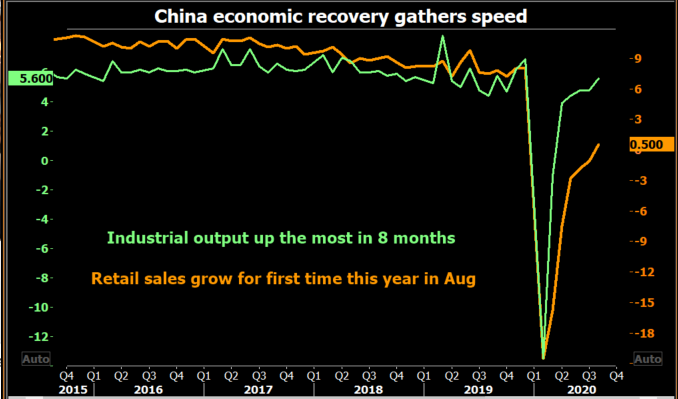