LONDON (Reuters) - Sterling edged lower on Friday as rising COVID-19 cases and the Bank of England signalling it is examining negative interest rates kept the currency under pressure.

After the pound gained some ground in early trade on data showing British shoppers kept spending last month, investors turned tail as Britain signalled it was considering whether to impose a second national lockdown.

The prospect of a chaotic end to the Brexit transition period in December if Britain fails to agree a trade deal with the European Union also continues to overhang sterling.

The BoE kept its main stimulus programmes on hold this week, as expected, and said that Britain’s economy had performed better than expected.

But highlighting risks relating to rising COVID-19 cases, the unwinding of jobs protection schemes, and Brexit, the BoE said it was ready to take further action.

Kit Juckes, head of FX strategy at Societe Generale, said that with the pound already very close to record lows touched in 1976, “negative rates can take sterling to a new all-time low.”

“Cutting rates to below zero in the wake of a decision to leave the EU without a trade deal, would indeed seem reckless,” Juckes added.

ING analysts wrote in a note to clients that they expect EUR/GBP to test 0.9300 again this month.

“We continue to see more downside to GBP as not enough risk premia is priced into the currency.” 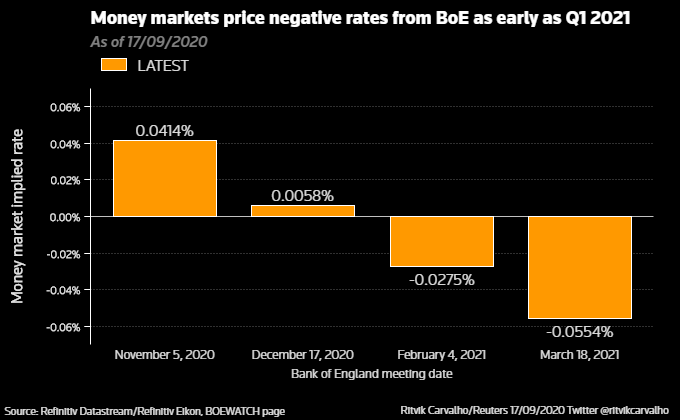 Gold is slightly higher leading into the European open