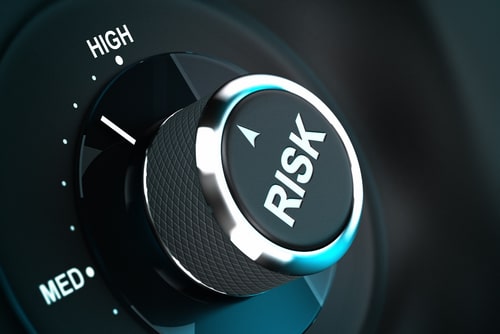 (Kitco News) The gold price is encountering extreme turbulence as fall kicks into full gear. Here are the top three biggest risks the gold market is facing during this most volatile season, according to analysts.

One of the biggest drivers for gold will be the equity market. Gold is likely to trade higher when stocks are up and fall lower when equities sell off.

The equity markets are a good gauge of uncertainty levels, especially when it comes to the U.S. economic recovery, the U.S. election, the possibility of more fiscal stimulus, geopolitical tensions and much more.

"If the market moves significantly lower and enters into panic mode, volatility jumps and you might see folks having to cover margin calls and sell their gold because they need liquidity," TD Securities head of global strategy Bart Melek told Kitco News.

A rush to cash is the likely outcome, which is why gold is also at risk in this sell-what-you-can scenario.

"If the economy takes another hit, I suspect cash will be a focus for investors. In this scenario, it is likely the metals will also be under pressure because of the inherent gains in this market, especially gold," said Kitco Metals global trading director Peter Hug. "A movement to cash liquidity is the biggest risk to the metals and without further government support from a liquidity perspective, a weakening equity market remains the top risk."

At the end of the day, investors fall back on the U.S. dollar, Melek pointed out, especially when it comes to settling redemptions and margin calls.

"That could mean a spike in the U.S. dollar. You can see a situation where that higher volatility is driving investors out of everything and that includes gold. We've already seen that happen. Right when the COVID crisis started, we had a massive liquidity crisis and the Fed had to step in and fix things essentially. Gold also moved down from $1,706 to $1,450," he added.

And even though the long-term macro picture remains very supportive of higher gold prices, short-term volatility in the stock market takes priority.

"Despite the fact that you have positive macro conditions along with the Federal Reserve willing to continue to support markets with low interest rates as well as adding more QE over time, what we see is that volatility take precedent short-term in light of the uncertainty about the future political configuration of the U.S.," Melek explained.

However, even though a sharp drop in gold is almost inevitable in light of a stock market meltdown, a resumption of the gold rally following this drop is also looking very likely, Bloomberg Intelligence senior commodity strategist Mike McGlone told Kitco News.

"A sharp decline in the stock market like in March may have an initial knee-jerk pressure response in gold, but increasing stock market volatility and a potential bear-market in equity prices will solidify the foundation for advancing gold," McGlone said. "I sense we are nearing an inflection point where gold will resume outperforming the U.S. stock market, notably the Nasdaq."

The U.S. dollar has also been putting downward pressure on gold as additional fiscal stimulus from the U.S. government is looking unlikely before the November election.

"From a risk perspective, it's the economy. If the equity markets continue to selloff, it will be critical for the government to add more stimulus," Hug said. "With the election, it is becoming more doubtful that the government will take action on the economy."

The death of Supreme Court Justice Ruth Bader Ginsburg on Friday has created a new round of complexity when it comes to the U.S. fiscal stimulus, said Capital Economics senior markets economist Oliver Jones.

"The recent death of a Supreme Court Justice in the U.S. makes it more likely that politicians there will squabble over the vacancy than come together to agree more fiscal support before the election," he noted.

Rising coronavirus cases in the U.S. and Europe also play into this as the world's economic recovery could see a rapid reversal if more shutdowns are introduced to deal with the second wave of the outbreak.

"There now appears to be an even greater risk than we had previously feared that daily coronavirus cases continue to rise sharply in the U.S. and Europe in the near term and that we will see the further re-imposition of restrictions, such as we have seen them in the UK today," Jones added.

The U.S. election is also a big part of the equation here with certain political headlines increasing volatility surrounding this major political event.

“Regarding the upcoming election, indices such as the VIX indicate a huge amount of fear, anxiety, and turmoil has now been priced into the market regarding the potential outcome of a contested election,” Goehring & Rozencwajg Associates managing partner Leigh Goehring told Kitco News.

The period between when exit polls are released until the outcome "could be wild," said Pepperstone head of research Chris Weston.

"A key consideration is the timing of the result. In 2016 Trump was declared the winner at 02:29 am local time the day after polling closed. In 2012, Obama knew he would get a second term at 23:38 local, so markets didn't have to wait long to react and price certainty," Weston said.

Melek also pointed out any aggressive comments or a contested election could create significant ripples in the marketplace.

"It is entirely feasibly that we will not know who the winner is right away. On November 3rd, we'll get physical returns. But two weeks later, mail ballots come in and that swings the votes. And then Trump could say this is illegitimate and we could end up with a bit of a constitutional crisis. It is uncertain how things will go," he said.

A contested election is a real possibility this time around, added Weston, citing an increased amount of postal voting in light of the COVID-10 pandemic.

"It may be a matter of days, if not longer until the true result is known, and this is especially true given some of the swing states, with high Electoral College seats, have significantly high postal voting intension," he described. "Also consider that numerous research studies have shown that a greater proportion of those who intend to place postal votes will likely vote Democrat, so there is a risk markets could be thrown around by the who is likely to end up winning."

On the other hand, if Donald Trump or Joe Biden win a decisive victory and the election concludes with only minimal disruptions, gold could face a downward pressure, said Goehring. “The markets are expecting election trouble, and if this doesn’t happen, we could see a sell-off in ‘risk-off’ assets such as gold,” he noted.

The overall consensus for the gold price seems to be from sideways to higher after the markets get past this extreme volatility.

"I expect the gold price will work off its overbought condition and resume the stair-step rally its been in since the 2015 low around $1,000 an ounce. Last year, the key resistance hurdle was $1,400 and this year, it appears to be about $2,000. Gold is a bull market in my view, that's just resuming following a sharp pull-back and extended period of underperformance, on the back of an improving fundamental backdrop including -- increasing QE, debt-to-GDP ratios, stock market volatility and declining rates and yields (on a global scale)," McGlone explained.

Sideways to higher price action is what Wyckoff has priced in for the coming weeks and months. "There are always geopolitical developments that pop up unexpectedly, and I suspect in the coming weeks or months a new hotspot will develop somewhere around the world to support the safe-haven metals," he noted.

Melek sees gold ending the year around the $1,925 an ounce level.

Capital Economics is pricing in a tad higher prices by the end of this year, citing declining real bond yields worldwide. "Many central banks, including the U.S. Federal Reserve, have stated that they will keep monetary policy ultra-loose for some time even if inflation temporarily overshoots their mandated targets," Capital Economics assistant commodities economist Samuel Burman said.