NEW YORK (Reuters) - A barrage of worrisome news is rocking the U.S. stock market after a nearly six-month surge, leading some investors to question whether the recent selloff in equities heralds a longer period of volatility.

The S&P 500 index was on the verge of a correction, defined as a 10% drop from its all-time closing high, after ending 9.6% below its Sept. 2 record on Wednesday. The benchmark index was higher in Thursday afternoon trade after shuffling between gains and losses earlier in the session.

The tech-heavy Nasdaq Composite confirmed a swift correction earlier this month, and remained down more than 10% from its Sept. 2 high even as the index was rising on Thursday.

The rapid selloff has occurred amid fading hopes of further coronavirus-related fiscal stimulus from Congress, looming political uncertainty over the U.S. presidential election and fears of a COVID-19 resurgence in the fall.

“The action that we have seen this week makes me less confident that this is a healthy correction,” said Willie Delwiche, investment strategist at Baird.

One source of unease has been the failure of lawmakers to agree on further fiscal stimulus to help the U.S. economy recover from coronavirus-fueled shutdowns earlier this year, despite Federal Reserve officials’ repeated calls for more aid.

Analysts at Goldman Sachs cut their forecast for fourth-quarter growth in gross domestic product (GDP) to 3% from 6%, based on an apparent lack of further fiscal support, which they said would reduce disposable income and weigh on consumer spending.

“The lack of stimulus, the uptick in coronavirus cases, the tension coming out of D.C. overall lends to an environment that is going to be a little bit harder for stocks to remain relatively sanguine through,” Delwiche said.

Earlier this month, Blackstone Executive Vice Chairman Tony James warned on CNBC that this could be a “lost decade” for equity returns as companies struggle to grow their earnings.

During the recent selloff, the focus has centered on large technology and growth stocks that have carried the market for much of the year, but have also been hit harder this month.

The S&P 500 technology sector had fallen 12.8% from the market’s Sept. 2 high as of Wednesday, while Amazon and Netflix each had declined about 15% over that time.

Tech stocks lead on the way up - and down:

September has marked a reversal in stock market trends that have persisted for much of 2020. Without the performance of the tech sector, as well as Amazon and Netflix, the S&P 500 would have lost more than 9% of its market value as of Wednesday, as opposed to a 0.2% gain for the year, according to Refinitiv data. 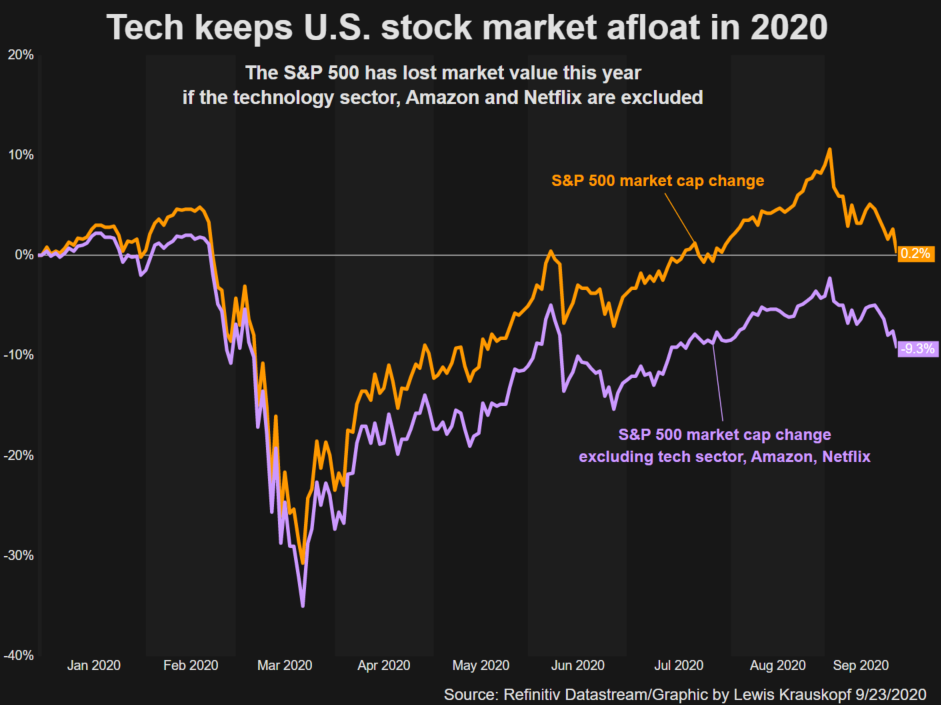 The concentration of the S&P 500’s weighting in a handful of stocks has been a consistent theme worrying investors.

Since the end of 2018, the S&P 500 is up 29% and five “FAAMG” stocks - Facebook, Apple, Amazon, Microsoft and Google-parent Alphabet - are responsible for half of that gain, Michael O’Rourke, chief market strategist at JonesTrading, said in a note Wednesday night.

Even with the recent swoon, the stock market’s valuation remains relatively high, with the S&P 500’s price-to-earnings ratio recently revisiting levels not seen since the dot-com bubble two decades ago. 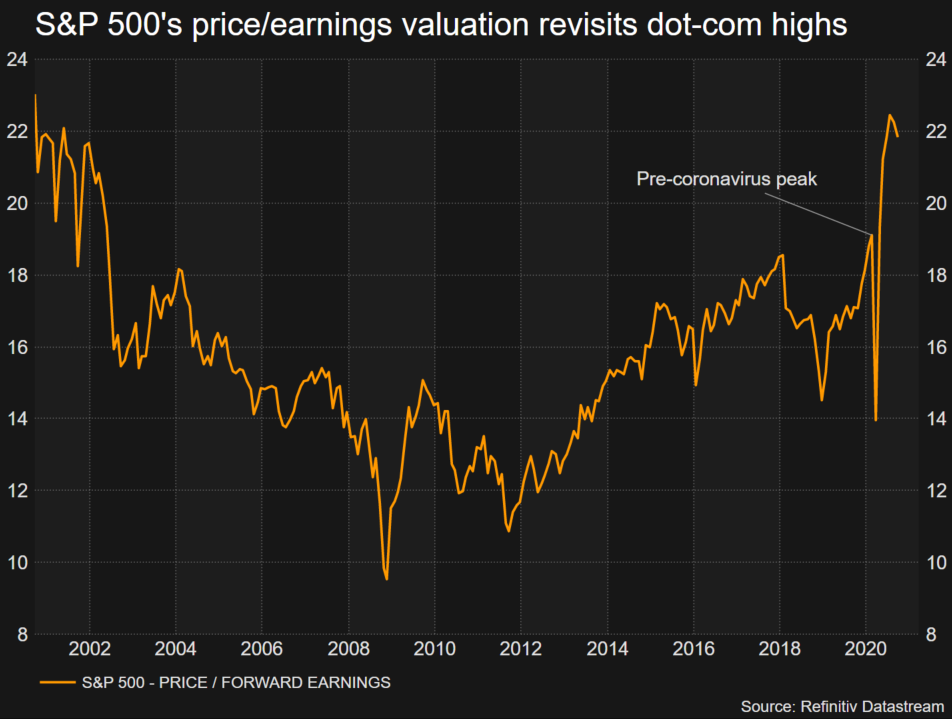 Some investors remain unconcerned about the comparatively high multiples of many stocks.

Sharp rises in valuation tend to occur during early cycle recoveries and are also being driven by the Federal Reserve’s easing programs, Jurrien Timmer, director of global macro in Fidelity’s global asset allocation division, said in a recent commentary.

“P/E ratios will undoubtedly come back down to earth at some point, but as long as earnings start to recover soon it does not need to be at the expense of price,” Timmer wrote.