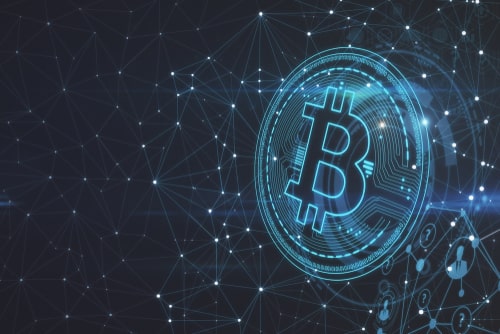 (Kitco News) The price trajectory for bitcoin is up, according to Bloomberg Intelligence, which sees the popular cryptocurrency adding another zero to its price tag and trading at $100,000 in 2025.

"Bitcoin could continue doing what it has for most of its nascent existence, appreciating in price on the back of increasing adoption, but at a slower pace as we see it. The first-born crypto has had a tendency to add zeros to its price from around $10 in 2011. It took about four years to go from $1,000 to $10,000 in 2017, so doubling that time frame for maturation could get the price toward $100,000 in about five more years," wrote Bloomberg Intelligence senior commodity strategist Mike McGlone.

The driver behind this rally will be wider adoption, McGlone added while pointing to historical price charts for an explanation.

"Bitcoin is unique in that supply cannot be influenced by price, leaving adoption as a primary valuation metric," he said in the October update. "Since initially reaching $10,000 in 2017, the benchmark crypto corrected about 70% and remains in an extended period of consolidation around that level. When Bitcoin first traded at $1,000 in 2013, it corrected about 80% and consolidated. About four years after initially reaching $1,000, it added a zero … Bitcoin has a history of adding zeros." 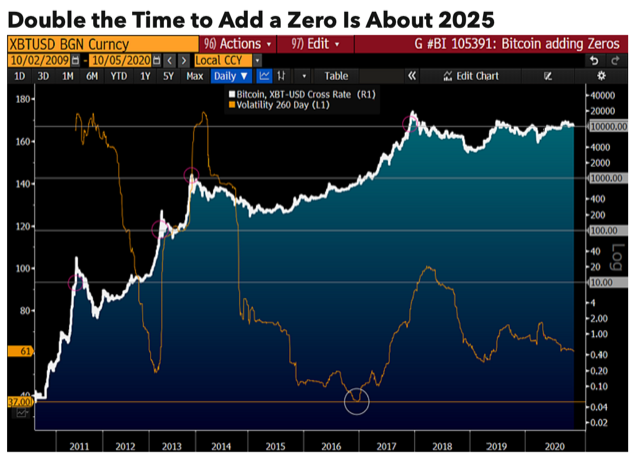 The demand fundamentals are looking positive for the cryptocurrency with expectations that new adoption measures will continue to boost prices higher. Also, bitcoin's growing market cap will act as a demand accelerator for adopting the cryptocurrency, creating a path for higher prices.

"The total value of gold is around $9 trillion vs. only about $190 billion for Bitcoin. For comparison, the benchmark crypto is about half the market cap of Tesla. A big difference is higher prices are increasing the supply of Tesla stock. Bitcoin supply is fixed and declining on an annual percentage basis," explained McGlone. "At less than $200 billion, the Bitcoin market is too small for many large institutions, including central banks, to add the crypto as part of their holdings, but if the market cap of Bitcoin increases, it becomes increasingly like a digital version of gold."

Investors could see bitcoin rise to $14,000 before the end of this year, added McGlone.

Bitcoin is becoming more like gold, and this year points to an interesting correlation, noted McGlone.

"Bitcoin, like gold, is in transition to being a beneficiary of increasing stock market volatility, in our view," he said. "Our chart depicts the highest Bitcoin-to-gold 12-month correlation in our database since 2010. The crypto 12-month measure vs. the S&P 500 is elevated, but has been higher." 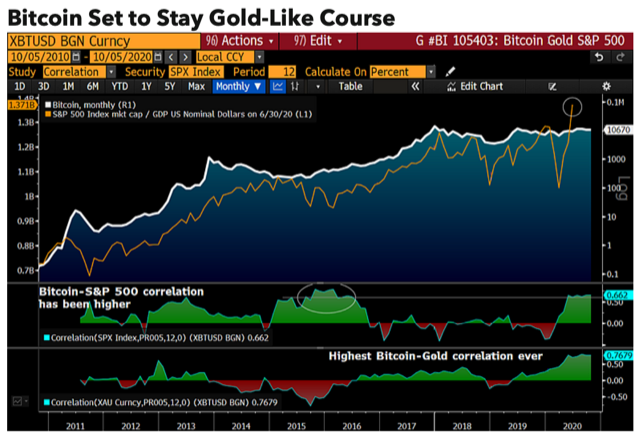 Gold and bitcoin have been gaining alongside each other this year and are likely to continue to do so as the stock market slows down, the October update added.

"The dichotomy of an unchanged U.S. stock market in 2020 nearing the end of 3Q vs. the advancing prices of gold and Bitcoin is a shift toward relative value that we see gaining endurance," McGlone said. "If the rapidly advancing stock market of the past decade has run its course … more quantitative easing and rising debt-to-GDP levels are likely, supporting the stores of value."