Biden victory presents 'the most upside risk' for gold price and it's yet to be priced in, says Standard Chartered 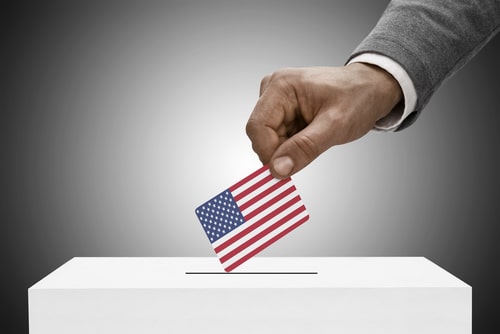 (Kitco News) An election win by the Democratic presidential candidate Joe Biden presents the “the most upside risk” for gold into year-end and it has not been fully priced in by the precious metals market yet despite Biden leading in the polls, according to Standard Chartered.

“Despite the polls, gold price action and positioning do not seem to fully reflect a Biden victory. A Biden victory and full control of Congress presents the most upside risk for gold prices. Still, beyond the election, the macro backdrop remains supportive of further gains for gold,” Standard Chartered precious metals analyst Suki Cooper said on Wednesday.

Cooper sees gold rising back up to $2,000 an ounce during the fourth quarter of this year and then climbing to $2,100 during the first quarter of next year.

Gold has been closely tied to the U.S. dollar moves this year and that is likely to continue. This is why Cooper highlights Biden’s victory as the one most beneficial to gold.

“The USD remains the primary driver for gold at the moment and in the past six elections, the gold-USD correlation was not only firmly negative five weeks ahead of the presidential election, but also remained so at the time of the election; in half of the instances, the relationship strengthened,” Cooper explained. “A Biden victory and Democrats gaining full control of Congress paints the weakest scenario for the USD, UST yields and U.S. risk assets in light of intended fiscal stimulus and tax increases; and given that gold currently has the strongest correlation (over - 50%) with the USD, the USD response is key.” 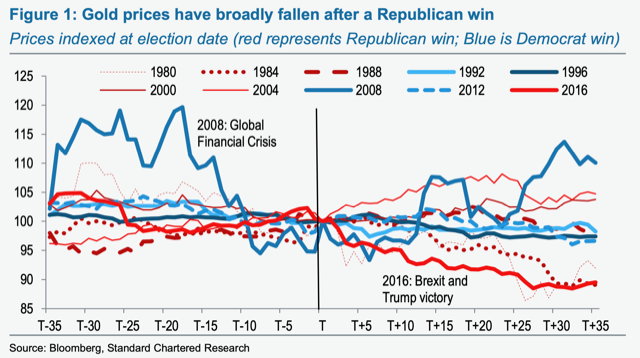 Broadly speaking, the gold price has edged down after a Republican win, according to historic analysts.

“In the past six elections … gold’s price response leading up to the election has been mixed, but historically prices have broadly edged lower after a Republican win,” Cooper noted.

The possibility of a contested election complicates the situation. “There is significant uncertainty related to gold’s performance in the event of a contested election. Using the 2000 election as a guide, we note that gold prices initially traded in a range-bound fashion, only to gain traction into late November as the uncertainty was prolonged. However, 1999 was also a low point for gold, before fundamental drivers turned supportive,” Cooper added.

For now, gold remains below the $1,900 an ounce level after U.S. President Donald Trump announced that he is canceling stimulus talks with the Democrats until after the election. At the time of writing, December Comex gold futures were trading at $1,890.3, down 0.97% on the day.

“Short-term positioning is yet to build ahead of the U.S. election, but we believe longer-term, negative real rates, unprecedented stimulus and a weaker USD will continue to dominate and provide a favorable backdrop for gold,” Cooper said.

Overall, most scenarios this year involve a weaker U.S. dollar, which is beneficial to gold in the long-term, the analyst noted.

In the short-term, fiscal stimulus delays ahead of the election will create some choppy price action for gold. Still, dips in prices provide a good buying opportunity.

“Volatility surrounding the election and fiscal stimulus are likely to offer attractive entry points for long positions,” Cooper said. “The longer-term correlation with U.S. equities is close to neutral and we would expect this to be the case again; however, leading up to the election, we could see gold behaving as both a safe haven – as it did last week – and a risk asset.”