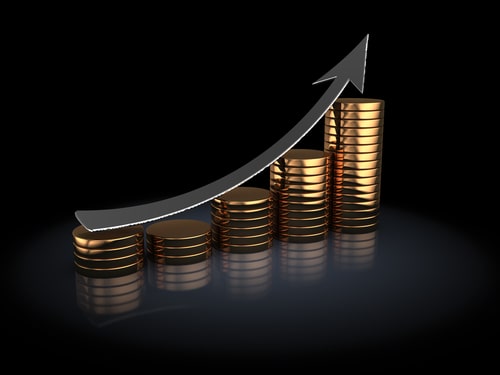 (Kitco News) There is one driver that could really re-ignite the gold price rally during this turbulent fourth quarter, according to Bloomberg Intelligence (BI).

All macro and political risks aside, a peak in the dollar is the one factor that can push gold significantly higher, BI senior commodity strategist Mike McGlone said in his Q4 update.

"Gold is likely to remain atop our macro-performance scoreboard in 4Q," McGlone said. "The greenback entering a bear market would propel gold, if history is a guide."

The yellow metal is currently in a bull market with strong established above $1,800 an ounce after a sharp rise to a new record high of $2,075 an ounce this summer.

"As a bull market resumes, the metal has pulled back from getting overextended above $2,000 an ounce and should build a base around $1,800, with increasing debt-to-GDP and quantitative easing the catalysts," McGlone wrote.

Another sign of the current bull market is that gold hasn't wrapped up a quarter since Q1 2019, less than 8% above its 50-week moving average, McGlone pointed out. 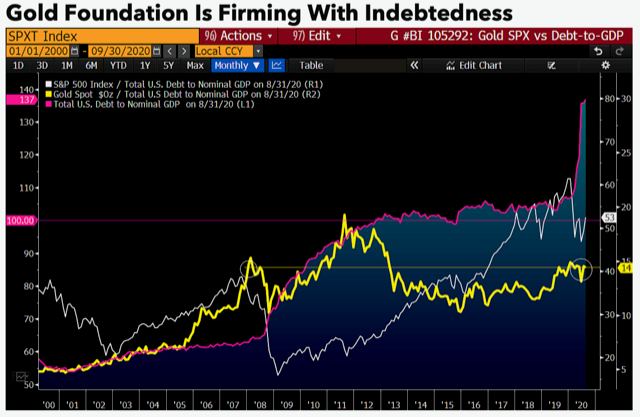 Bloomberg Intelligence sees gold eventually climbing back up to its new record highs, especially in light of the increasing debt-to-GDP ratio and massive global quantitative easing.

"History dictates that the gold-price rally should accelerate toward $2,000 if the dollar is peaking," McGlone said.

The debt-to-GDP ratio is an important one to pay attention to when it comes to projecting gold price rallies, according to the Q4 update.

"A prime reason the store-of-value metal should continue rising -- U.S. relative indebtedness has leaped to about 140% vs. an average just above 100% since 2012. The fact that debt-to-GDP rose despite one of the longest economic expansions in history to 2020 suggests there's little to reverse the trend. We see gold staying the upward trajectory and potentially getting overextended like it did to the 2011 peak. An underperforming stock market would be a top support for the metal," McGlone explained.

Plus, once the U.S. dollar enters its bear market, gold could really take off. "The U.S. stock market reaching its record ratio vs. GDP in 3Q signals stiffer equity and dollar headwinds, meaning the performance baton may pass to the metals and agriculture," McGlone noted.

On top of that, gold has developed divergent strength in the face of a rising U.S. dollar this year, which points to a solid price footing and even a more significant price acceleration once the dollar drops.

"Our graphic depicts the divergent strength in gold despite a rising dollar. Since the Federal Reserve rate hike in December 2015, gold has gained about 80% vs. 5% in the dollar," McGlone stated. "In more of a nascent resumption-rally mode at the onset of 2020, the benchmark store-of-value metal appears poised to accelerate its edge vs. most assets if the dollar peaks. In 2008, when gold reached the $1,000 handle the first time, the trade-weighted broad dollar had dropped to a 13-year low. Record highs in March elevate greenback mean-reversion risks, favoring dollar-denominated gold." 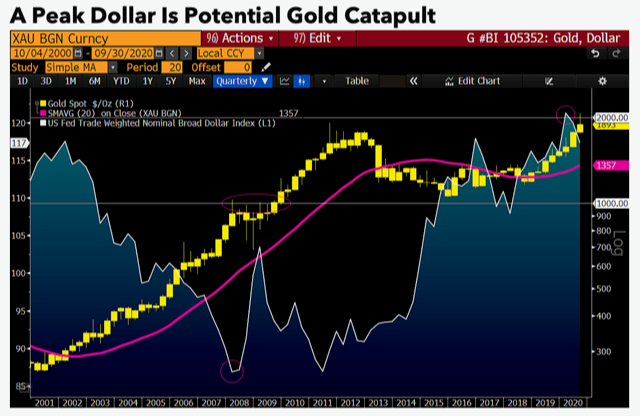 When it comes to silver, McGlone projects a re-take of $30 an ounce and rules out a return to this year's lows of $12 an ounce.

"Silver's 2020 trading range of about $12-$30 an ounce could mark the low forever, while the high should eventually be breached," he wrote. "It's a matter of time, if history is a guide, before silver revisits $30 resistance, as we see the metal in a similar breakout pattern as 2003-04."