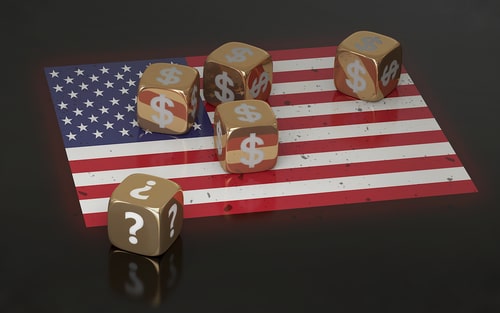 (Kitco News) It has all been about the fiscal stimulus package this week and whether or not something can be passed before the election. According to analysts, who are now in the election countdown mode, the market turmoil is far from over.

Optimism over more federal fiscal aid has pushed the stock market and gold higher at the end the week. Trump tweeted on Friday: "COVID Relief Negotiations are moving along. Go Big!"

The news came amid reports that the White House will increase its coronavirus stimulus offer to $1.8 trillion.

In response, the U.S. dollar index continued to weaken, stocks climbed, and gold advanced 2% on the day with December Comex gold futures last trading at 1,933.70 an ounce.

"What is happening in gold is we've had a stimulus-on/stimulus-off style news flow. This has whipsawed a lot of gold traders," TD Securities commodity strategist Daniel Ghali told Kitco News on Friday. "Right now, the focus will continue to be on the election. Election countdown mode is here, so the next 20 days will mostly revolve around that."

The situation remains a difficult one at the moment. On top of political headlines, coronavirus cases are climbing, and there are continued China-U.S. tensions, MKS SA senior vice president Afshin Nabavi noted.

"A couple of days ago the White House said there was not going to be a stimulus package and the whole thing dropped like a rock. Yesterday evening, they signaled they are leaning towards a large stimulus package. They changed their decision rather quickly," Nabavi pointed out.

"It seems like the U.S. government will be moving forward with the stimulus package. The only caveat is that it sounds like it won't get done before the election, and they might drag it out a bit," Pavilonis told Kitco News. "The idea that it is in play is bullish for the metals."

However, if the deal falls apart next week, the gold market might see another pullback, Pavilonis warned.

One piece of advice for investors trading into the election is to view gold price dips as great buying opportunities, Nabavi said. "Global economy is going up in smoke with all the pressure from coronavirus picking up again. There is no reason why gold should come off. If it does, it is just an opportunity to jump in."

One major issue that is adding to volatility in gold is the lack of market liquidity. "The good old days when there was a lot of interest in the market have disappeared. If someone decides to put on a trading position or take it off, the market reacts very badly. That's why we ran getting daily ranges between $30-$40," Nabavi explained.

Gold's longer-term outlook remains bullish, according to Ghali, who sees the yellow metal is being "agnostic" to either presidential candidate.

"We reiterate that regardless, gold bugs need not look too far on the horizon to expect a large-scale fiscal deal … With both the Trump and Biden agendas estimated to cost between $5 trillion and $5.6 trillion over the next decade, both plans would provide substantial tailwinds for the long gold trade," he said.

One distinction that Ghali made was that a Biden win is likely to lift gold prices even more. "Blue wave is starting to get priced in more seriously, and in that context, it is a more bullish scenario for gold. A blue wave would lead to more dollar weakness and stronger gold," he said. "One part is that the Democrats will spend more, and the other part is global reflation. Currency strategists expect the U.S. dollar to continue to weaken under the blue wave."

The inflation expectations support much higher gold prices in the long-term, especially with $3.5 trillion already spent and more on its way, explained Pavilonis.

"We are starting to see some data coming out that points to possible inflation. Different indicators are showing better than expected figures to the upside. And now, we are adding another layer to it. This could be a self-fulfilling cycle of more inflation," he said.

On top of all that spending, the U.S. central bank will now be keeping rates low until inflation is above 2% for an extended period of time, Pavilonis added. "This is ultimately bullish for gold in the long-term," he said.

After the election, gold will remain on top of everybody's list, hitting $2,000 and going higher, noted Nabavi.

One significant risk that remains for Q4 is a contested election, Pavilonis pointed out. "The risk is that after the elation, the result is not called. If there is political infighting and then possible civil unrest … that is the worst-case scenario," he said.

Also, a contested election would delay stimulus if it is not passed ahead of the November 3 date, added FXTM market analyst Han Tan.

"Unless the fiscal stimulus deal is agreed before November 3, a delayed result from the polls, in turn, starves the world's largest economy of some much-needed aid," Tan said on Friday.

The majority of analysts Kitco News spoke to on Friday were pricing in higher gold prices next week, highlighting the $1,960-$1,980 range.

Nabavi did not rule out a swift climb to $2,000 but warned that such a move would be "sloppy" and would likely be followed by a significant correction.

"The data flow includes inflation numbers, which have surprised on the upside recently, but given the flatlining energy components, we look for fairly benign 0.2% month-on-month increases in both headline and core inflation," said ING economists on Friday.

Wrapping up the week will be U.S. retail sales numbers from September as well as industrial production.