What more do you want? The gold price has made "a heck of a move" this year - State Street Global Advisors 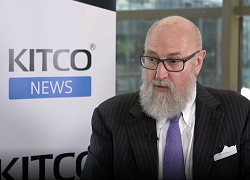 (Kitco News) - The gold market continues to struggle for direction as prices remain volatile around the $1,900 an ounce level; however, one gold analyst said that investors need to look at what the market has accomplished this year to see just how much potential it has heading into 2021.

In a telephone interview with Kitco News, George Milling-Stanley, chief gold strategist at State Street Global Advisors, said all the uncertainty and market turmoil that drove gold prices to record highs in August hadn't gone away. He added that in the last two months gold has continued to solidify its base and appears to be building steam for another move higher.

"My sense is there is so much wrong with the world right now, macro, economically, and politically that gold can only go higher," he said. "We just need to get this little bit of nervousness or panicky profit taking out of the way."

Milling-Stanley added that it is difficult to be bearish on gold, give its performance since the start of the year. Even with the recent volatility, gold prices are up more than 24% this year. SPDR Gold Shares (NYSE: GLD), the world's biggest gold-backed exchange-traded product, has seen its holdings increase to 21 billion, Milling-Stanley added.

Instead of focusing on the near-term volatility created by the "on-again-off-again" stimulus negotiations in Washington, Milling-Stanley said investors need to focus on the broader issues dominating financial markets.

He said that growing government debt, low interest rates, and rising inflation expectations will continue to drive gold prices higher. He added that gold could easily be back to $2,000 an ounce by the end of the year heading into 2021.

Milling-Stanley said that he expects it's only a matter of time before Congress passes a stimulus bill; however, he added that he doesn't think it will solve the problems plaguing the U.S. and global economies.

He noted that the only thing that can drive economic growth is if economies open up, and they will only open up when consumers feel confident that the COVID-19 pandemic has been dealt with.
"We're in a recession. I think we're likely to stay in one," he said. "We're certainly not going to get out of the recession until we succeed in reopening and we are not looking like that's getting any closer."

As for gold prices, while economic uncertainty will continue to be an important driver for gold, Milling-Stanley said that the real rally in gold will come when the global economy is back on its feet.

"We won't see the inflation until the economy is coming along on all cylinders,' he said. "And that's probably not going to happen in 2020. I hope it happens in 2021."