LONDON (Reuters) - Switzerland’s gold exports to China and India dwindled in September, with the country instead importing record volumes of bullion from Hong Kong and sending metal to Britain, customs data showed on Tuesday.

The figures underline how Western investors have overtaken Asian jewellery buyers as the main driver of gold demand since the COVID-19 pandemic struck.

The pandemic has resulted in jewellery shop closures and reduced disposable income among consumers while triggering a rush by investors to stockpile an asset they think will hold its value through the crisis.

Switzerland is a major gold refining and transit centre, while London is a storage and trading hub where investors around the world hoard gold.

Swiss exports of gold to the United States, which surged earlier this year because of higher prices in the U.S. market, fell sharply for a second consecutive month in September. 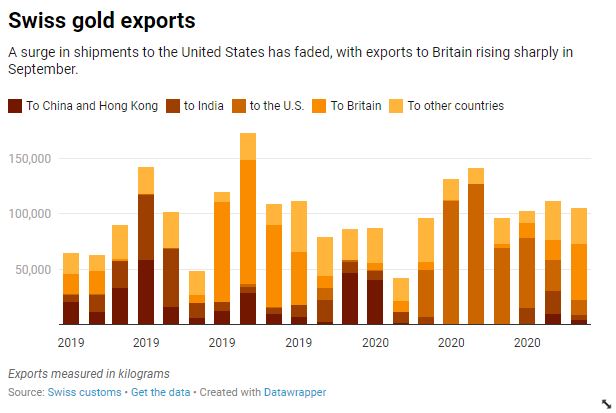 Switzerland exported 1.5 tonnes of gold to China in September, with 2.4 tonnes exported to Hong Kong and 5 tonnes to India, the customs data shows.

The previous month, it shipped 10 tonnes to China, nothing to Hong Kong and 20.2 tonnes to India as demand in those markets appeared to be recovering.

The dominant flow of gold in September was from east to west. Switzerland imported 37.7 tonnes from Hong Kong, up from 25.5 tonnes in August and the most for any month since Swiss data became available in 2012.

It exported 50.9 tonnes to Britain, up from 18.4 tonnes in August and the most since September last year.

In total, Switzerland exported 105.9 tonnes of gold in September, down from 112 tonnes in August.

(This story refiles to fix typo in 11th paragraph)