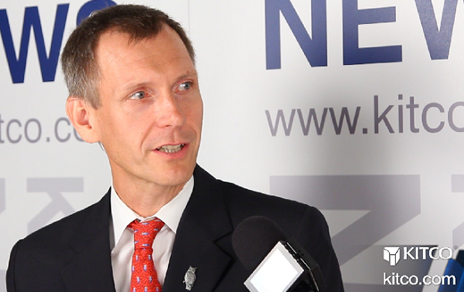 (Kitco News) - All the ingredients are in place to support higher long-term gold prices, according to one fund manager.

In a telephone interview with Kitco News, Axel Merk, president and CEO of Merk Investments, said that there are several important fundamental factors that drove gold prices to all-time highs above $2,000 an ounce; however, he remains bullish on gold as long-term inflation expectations move higher.

"We have a fed that wants to increase inflation, and they are committed to keeping rates low. That means real interest rates are going to go down over time, which is an environment that is favorable gold and that's are people embracing. If you believe that long-term rates will stay low, but inflation will gradually tick up that the price of gold may be worth investing in."

Although there continues to be a lot of back and forth regarding new federal government stimulus measures, Merk said that it's only a matter of time before more money is pumped into the financial system.

"Politicians have learned that they can spend a trillion dollars without consequences," he said. "That is going to lead to higher inflation."

Merk's comments come as his investment firm sees the value of its assets under management grow by $1 billion. Merk noted that the growth his fund has seen this year is just one example of the growing interest in the precious metals market.

Another factor Merk said that will continue to support gold is its role as an important portfolio diversifier. Because of massive liquidity pumped into financial markets, gold and equities have become highly correlated; however, Merk said that this correlation won't last.

"Gold's correlations break down against just about everything over time. And that's why you have it because at some point it will provide a different role in your portfolio," he said.

He added that in the current environment of low interest rates and rising economic uncertainty, pension funds and institutional investors are paying more attention to the gold market. He added that it helps when someone like Warren Buffett invests in one of the world's largest mining companies.

Merk said that Berkshire Hathaway's $500 million bet on Barrick Gold doesn't signal a sentiment change for the Oracle of Omaha, who has regularly shunned gold as an investment. Merk said though the investment does draw new attention to the sector.

"Pension fund consultants, they are the most conservative crowd in the industry. They wouldn't touch gold miners with a broomstick. But now with Warren Buffet saying: 'Hey, it's okay,' we'll get some of these guys saying: 'well now it's okay for a pension fund to own gold miners,'" Merk said. "And that can, that can make a big difference for the space."

While gold should be an important diversifier in every portfolio, Merk said that with rising gold prices, investors should be looking at strategic investments in the mining sector. A major contribution to Merk Investments reaching its billion-dollar milestone has been a strong performance in the fund's mining stocks.

Merk noted that his fund is invested in a lot of junior exploration companies, a sector that has done well in the current environment. He added that he likes this sector as senior producers will have to continue to buy exploration plays if they want to maintain their current production levels.

"Majors have not invested any money into exploration, so at some point, they are going to have to tap the exploration sector for more ounces," he said.

As investors continue to look for inflation hedges, Merk said that the best investment advice he can give is that investors stick to what they are comfortable with. Develop a plan and stick with it, he said.