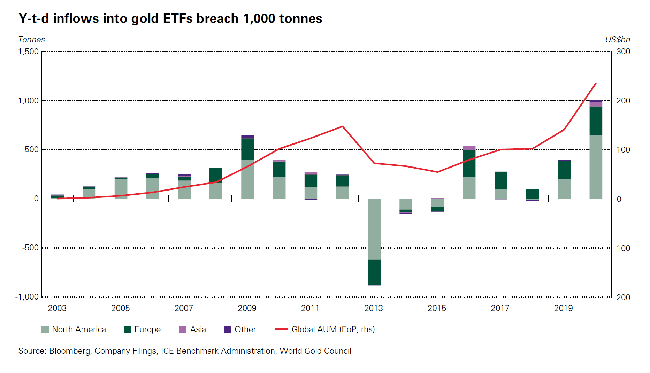 In its quarterly demand trends report, published Thursday, the WGC said that physical gold demand totaled 892.3 tonnes in the first quarter. The report said that physical demand saw an annual drop of 19%, compared to the second-quarter decline of 11%.

In the first nine months of the year, physical gold demand has dropped 10%, compared to the same time period in 2019, the report said.

The one pillar of strength in the gold market remains investment demand -- particularly growing holdings in gold-backed exchange-traded products. The WGC said that gold holdings saw net inflows of 272.5 tonnes in the third quarter, pushing total gold holdings to a record of 3,880 tonnes.

Historic investment demand was enough to push prices to a record high above $2,000 an ounce during the third quarter.

In a telephone interview with Kitco News, Juan Carlos Artigas, head of research at the World Gold Council, said that it's not surprising that investment demand remains the dominant factor in the gold space.

"What we are seeing in the gold market is what one would expect as the world continues to feel the effects of the COVID-19 pandemic," Artigas said. "Gold is doing what it is supposed to do."

As to whether or not investment demand can maintain the pace it has set so far this year, Artigas said that conditions are still in place as investors look for alternative safe-haven assets.

"Gold's role in financial markets is not going away anytime soon," he said. "The environment of uncertainty has been well established and has only been exacerbated by the coronavirus."

However, year-to-date demand was relatively flat compared to 2019 numbers.

Looking at the U.S. market, coin and bar demand totaled 19.2 tonnes in the third quarter, the strongest quarter since the fourth quarter of 2016.

"We believe that there was an element of catch-up in the Q3 purchases, as availability of popular one-ounce coins improved," the WGC analysts said in the report.

Turkey has been a major highlight for coin and bar demand as consumers have been buying precious metals enmasse to preserve their wealth as the lira has declined significantly this year.

"Demand increased more than seven-fold to 48.5t, the highest quarterly total on record and after already-strong buying in H1," the analysts said, looking at Turkish gold demand. "Safe-haven appeal has triggered this surge in demand, with a combination of domestic inflation, negative local real interest rates, and lira weakness..."

Artigas said that while bar and coin demand picked up in the third quarter, even in emerging markets, investors are paying more attention to paper gold and ETF. He added that restrictions due to the COVID-19 had forced people to find new ways to access gold.

"A lot of people have adapted their perspective on gold's role, and that is not going away," he said.

Looking at jewelry demand, it is clear that COVID-19 has taken its toll on the physical market. The WGC said that jewelry demand saw its third consecutive quarterly drop, rising by 333 tonnes, a decline of 29% from last year.

"The continued impact of the ongoing global pandemic at a time when gold prices reached a new record high had unsurprisingly negative implications for gold jewelry demand," the analysts said.

So far this year, jewelry demand totaled 904 tonnes, the lowest increase in the WGC's history.

"This is 30% weaker than the equivalent period of 2009 – the next lowest Q1-Q3 total and the time of the Global Financial Crisis," the analysts said.

Another important pillar for the gold market is central bank demand, which fell by 12 tonnes in the first quarter. This is the first time central banks have been net sellers in gold in nearly a decade.

"Nevertheless, central banks remain net purchasers on a y-t-d basis, with demand for the first three quarters totaling 220.6t. We continue to expect central banks to remain net buyers in 2020, albeit at a slower pace than in the previous two years," the analysts said.

It's not only physical demand that has contracted in the third quarter. The WGC said that gold supplies dropped 3% between July and September, even as recycling saw a modest boost.

Artigas said that while the COVID-19 pandemic has forced some consumers to stay home, he is surprised that there was not more gold recycling as prices hit record highs in August.

"I think this shows that although consumers aren't buying a lot of gold, they aren't quick to sell it either," he said. "People are starting to see long-term value in gold, and that is an important support for the market.
By Neils Christensen