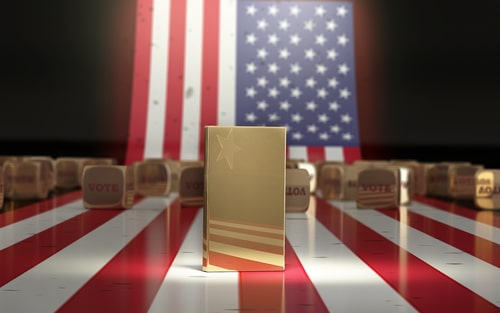 (Kitco News) Gold was up 1% gain as U.S. Election Day was well underway on Tuesday with weaker U.S. dollar and higher stocks helping the precious metal get above $1,900 an ounce.

"A somewhat weaker U.S. dollar is lending a tailwind," said Commerzbank analyst Carsten Fritsch. "The key event today is without doubt the U.S. election … "Apart from deciding who will be the next U.S. president, the entire House of Representatives and a third of the seats in the U.S. Senate are also up for election."

As Democratic candidate Joe Biden maintains his lead in the polls, the markets are carefully watching the swing states, which is how U.S. President Donald Trump won the election in 2016.

"According to the latest nationwide polls, the challenger Biden is still well ahead of the current office-holder Trump. Biden is also leading the polls in most of the swing states," Fritsch said. "This does not necessarily mean all that much, however, as we saw four years ago – at the time Clinton had a sizeable lead in the polls but then lost out to Trump on electoral votes because Trump was just able to take most of the swing states."

On top of the regular election jitters, markets are not certain the election results will be announced Wednesday morning.

"Counting is likely to take longer because of the unusually high number of postal votes; in the event of a tight outcome this could delay a decision on who has won key states such as Florida, Pennsylvania or Ohio," noted Fritsch on Tuesday.

More than 95 million Americans voted before the Election Day, which could delay results as all the mail-in ballots are being counted, said Bannockburn Global Forex chief market strategist Marc Chandler.

"Many observers warn of a cliffhanger that could be decided in the courts. The polls and surveys show strong odds in favor of a Democratic sweep," Chandler wrote on Tuesday.

Delayed results, contested results, or a prematurely declared victory could create more chaos in the markets. Whether or not gold can benefit from this will depend on the U.S. dollar, Fritsch added.

"In the U.S. Congress elections, the decisive issue will be whether the Democrats succeed in obtaining a majority in both chambers. If so, they could set in motion a substantial stimulus package. The resulting significant increase in national debt would lend buoyancy to gold in the coming weeks and months. However, it is unlikely that gold will come under noticeable pressure, as it did after the elections four years ago – when gold plunged by more than 13% in the six weeks after the election," Fritsch described.

BBH Global Currency Strategy also warned of a possibility of delayed results given the amount of mail-in ballots due to the coronavirus pandemic.

"Results may not be known for several days, if not weeks," BBH strategists said. "The best-case scenario for the markets is a unified government, with a Blue Wave preferable to a Red Wave due to the higher probability of aggressive fiscal stimulus. A split government (with Democratic president and Republican Senate or vice versa) would suggest continued deadlock and low probability of meaningful fiscal stimulus. That said, we think the absolute worst outcome is a contested election in which the results are not known for weeks and is ultimately decided by the courts. Markets hate uncertainty and this is the most uncertain outcome of them all."