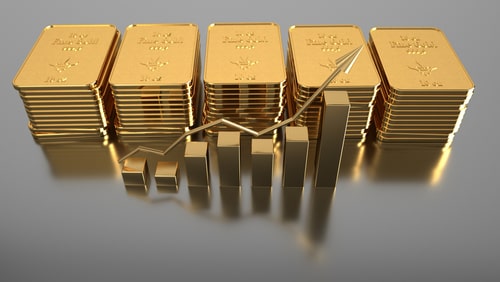 (Kitco News) After the euphoria of positive vaccine news, the risk-off sentiment is back in the marketplace as investors face a harsh reality of record coronavirus cases, more restrictions, and no new stimulus.

After losing $100 at the start of the week, gold has been in recovery mode, which will continue into next week, according to analysts.

"Even after the drop, we were constructive both gold and silver," said Kitco Metals global trading director Peter Hug. "Thought gold would hold $1,850, which it did … This is the market that you want to buy. I don't think anything changed."

On Friday, gold accelerated its advance as 10-year yields reversed, and the U.S. dollar weakened. December Comex gold futures last traded at $1,887.10, up 0.74% on the day.

"We've seen 10-year yields that recently jumped have come off. In that context, gold is doing well, volatility has dropped, and the market is realizing that it will be more of the same. We are going to have to have massive debt and very low interest rates. Continually we will have concerns about the debasement of currencies," T.D. Securities head of global strategy Bart Melek told Kitco News on Friday.

Pfizer vaccine news has not changed anything for gold, Melek added.

"We are still going to have a slow economy, it is going to take a long time to deploy vaccines for everyone, and they are going to need robust government actions, which will be funded by printed money for many years to come. And that means a good environment for gold. So we stick to our call saying $2,500 by the end of 2021," he said.

The Pfizer vaccine is not likely to be approved by the FDA until the end of December and not likely to be available on a large-scale basis until the summer, said Hug. "There are logistics of getting it out to population as it required two doses, and it needs to be kept at a certain temperature," he noted.

For a vaccine to have an impact on the economy, people need to start taking the vaccine and go back to work. "This process will take until mid-2021 when it becomes a reality. As we move into that phase and it looks positive, that is going to be positive for the economy," Hug pointed out.

Most importantly, however, central banks around the world will remain very accommodative in the meantime, which is great for gold. "Central banks won't put a brake on stimulus, and you'll have inflation rearing its head. This is positive for the metals," Hug said.

Melek expects next week to be good for gold, noting that selloffs are usually quick and more robust than the recovery, which takes longer.

"We had our selloff on the vaccine news from Pfizer, yields shot up. Now, we have a bit of a reversal where we have a second wave. We are not sure what is going on with fiscal spending. U.S. President Donald Trump doesn't seem to be conceding very quickly. All that represents a risk to the outlook," he said.

All eyes will be on election and stimulus headlines next week as markets want to see action and reassurance from the government as coronavirus cases continue to rise at a record pace in the U.S., seeing more than 120,000 cases reported per day this week.

"Biggest risk for gold next week is the inaction of the government. Either because U.S. President Donald Trump refuses to take any action before he concedes or Joe Biden can't take any action because he is president-elect and not the acting president," said Hug.

Markets are not ruling out more restrictions when it comes to public gatherings and businesses in the U.S. and soon, according to ING economists.

"With Covid cases spiking higher in the U.S., there is a sense that it won't be long before stricter containment measures are re-introduced – most likely soon after Thanksgiving," they said.

Stimulus talks appear to be back on the table, but progress is still looking unlikely, Hug added.

"Doesn't appear that Republicans and Democrats plan to get together and create a stimulus package before a new president is sworn in. This is a big risk to equity markets, especially if some of the states go into shutdown mode," he said. "This could also be negative for metals in the short-term. But, the macro picture for the metals looks good though as stimulus is coming. Medium-term, I am bullish the metals and negative the dollar."

And if there is no new stimulus in time, there will be more pressure on the Federal Reserve to do more, Melek pointed out.

"Let's not forget that there is a second COVID-19 wave, and we are not sure when we'll get the new stimulus. The conclusion here is that the Fed might have to do more work than otherwise," he said.

Next week will also see President-elect Joe Biden forging ahead with transition planning. At the same time, U.S. President Donald Trump continues to contest the results.

"The political backdrop remains a source of uncertainty with vote recounts, legal cases, and claims of fraud bubbling away in the background. This is fuelling political animosity, and we are concerned that any fiscal support to help mitigate some of the economic damage from restrictions may be slow in coming as a result," ING economists said.

However, the dire situation of rising coronavirus cases and millions of people still out of work might push the U.S. government to finally make some sort of deal, LaSalle Futures Group senior market strategist Charlie Nedoss told Kitco News.

"Stimulus worked last time. But we already see lessening effects as a lot of people are out of work, cases are getting worse, and we might see more lockdowns. There's a greater impetus to get some stimulus out," Nedoss said.

Key levels for next week

Nedoss sees gold challenging the 20-day moving average of $1,898 next week, which is close to the psychologically important $1,900 mark.

There is a slate of key macroeconomic data scheduled to be released next week, including U.S. retail sales on Tuesday.

"Any type of numbers that are decent are okay for gold mainly because inflation expectations should get a bit of a boost," Melek said.

The gold bulls are back and looking towards $1,900

CPM Group - politics and gold, the lessons of 1933 - Jeffrey Christian