(Reuters) - The number of Americans receiving unemployment benefits under pandemic programs set to expire the day after Christmas continued to rise in early November, according to a Labor Department report released Wednesday.

That means millions of families will see income fall sharply in the middle of the holiday season, making it harder for them to afford rent, groceries and other necessities.

As of Nov. 7, the most recent data available, a total of 13.7 million people were receiving unemployment benefits through emergency CARES Act-related programs expiring Dec. 26. That is up from 13.1 million for the week ending Oct. 31. 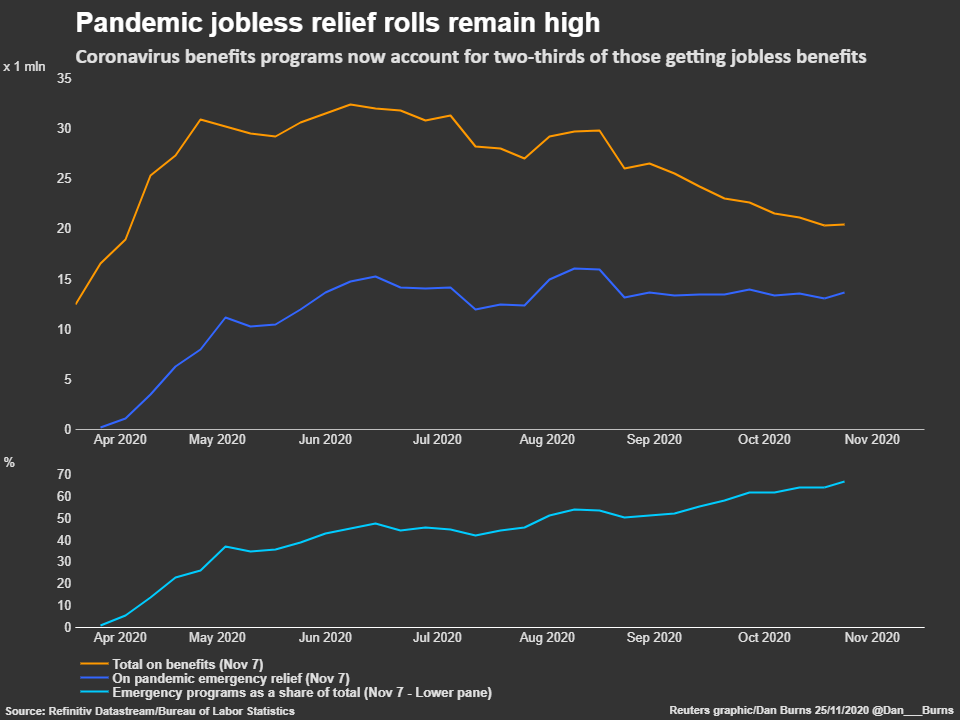 The national average weekly benefit was $317 in October. .

While some people may find jobs before their benefits run out, rising coronavirus infections threaten to dampen holiday hiring, slow the economic recovery and increase job losses.

The virus has killed more than 257,000 Americans and infections and hospitalizations are soaring. The number of people claiming jobless benefits for the first time rose last week for the second week in a row.

The majority of people receiving emergency benefits, or 9.1 million, are enrolled in pandemic unemployment assistance (PUA), which expanded unemployment benefits to freelancers and self-employed people who wouldn’t usually qualify for this aid.

Some 4.5 million people collect pandemic emergency unemployment compensation (PEUC), which provides 13 extra weeks of benefits for people who have exhausted state benefits. Enrollment is growing steadily as more people use up their regular benefits, which last for up to 26 weeks in most states.

Both those programs expire on Dec. 26. Congress has not been able to agree on another round of fiscal stimulus to replace them. Democrats want more than $2 trillion in new benefits and Republicans favor a narrower bill that shields companies whose employees catch COVID-19 on the job from liability.