This is only the start for gold prices as bitcoin hits an all-time high; currency debasement will drive prices higher – Charlie Morris

(Kitco News) - The gold market is struggling to find near-term bullish momentum as the price trades below $1,800 an ounce; however, one fund manager said that if investors want to know where the precious metal is heading, they need to look to bitcoin.

Monday, the digital currency pushed to a new all-time higher within striking distance of $20,000. Charlie Morris, chief investment officer at ByteTree Asset Management, said that he sees a lot more room for bitcoin to go as it has started a new bull run.

As bitcoin continues its surge higher, Morris noted that according to his research, seasonal factors support the digital asset during the second and fourth quarters. On average, the bitcoin has seen rallies of more than 60% and 50% in even quarters.

Meanwhile, gold sees its best performance during odd quarters. Looking at gold, he added that the market is currently trading at fair value; however, he also said that strong fundamentals continue to support higher gold prices, and it's only a matter of time before gold resumes its uptrend. 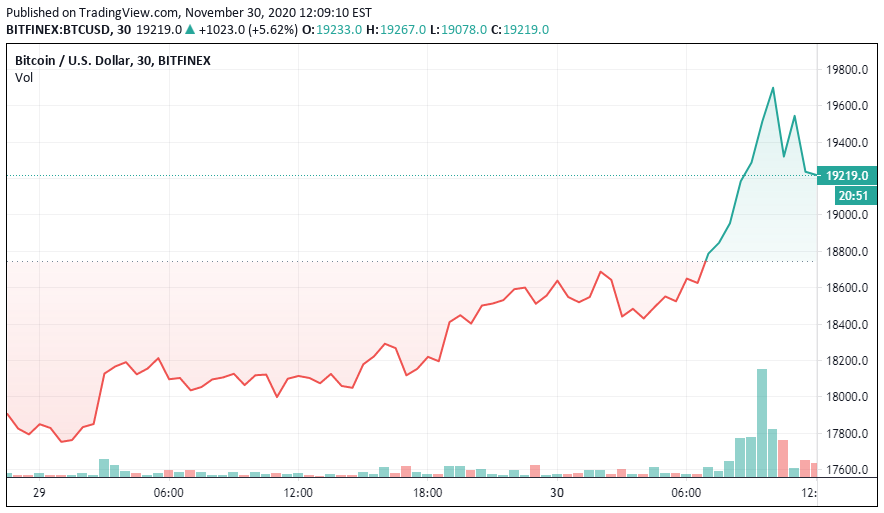 "The gold market was pretty hot this summer, so it's not surprising to see the price slip back a bit heading into year-end," he said. "Some money has pulled out of gold, maybe it has gone into platinum because of the green movement and obviously some of it has gone into bitcoin, cause all this excitement."

Morris' firm investment invests in both digital assets like bitcoin and gold. While a lot of investors see bitcoin and gold as competing assets, Morris said that he views them as complimenting assets. He added that both markets are currently reacting to the same market factors: unprecedented stimulus measures and the wave of inflation that is expected as a result.

"Bitcoin and gold are both on the right side of the inflation trade," he said. "They are both assets that will protect investors from the massive fiat currency debasement trade that is coming."

For those investors who are questioning whether inflation will actually pick up in the next few years, Morris said that they just have to take a look at other commodities. Copper prices are currently trading at an eight-year high, and oil prices are starting to creep higher. Oil prices are benefiting from ongoing news of potential vaccines for the COVID-19 as investors start to price a faster-than-expected recovery in the global economy.

"For gold, the bond market hasn't noticed the rally in oil and copper, but when they do, you will start to see real yields drop further into negative territory," Morris said. "That is when gold starts to rally again. Inflation expectations have to go higher unless the central banks around the world just halt everything they are doing, and that is very unlikely to happen."

In a world that is expected to see weaker fiat currencies because of rising inflation and massive government debt levels, Morris said that bitcoin and gold will play more important roles in an investor's portfolio. He added that bitcoin is the risk-on trade in the current environment as its volatility will lead to higher prices in a bull market; however, at the same time, gold remains an important risk-off asset.

"Gold is the reference point of what an anti-debasement stable asset is supposed to be," he said.

Although gold prices are struggling to find renewed buying interest, Morris reiterated his 10-year target for gold to reach $7,000 an ounce by 2030.

At the same time, because of its volatility, bitcoin prices over the next 10 years could be worth around $4 million.