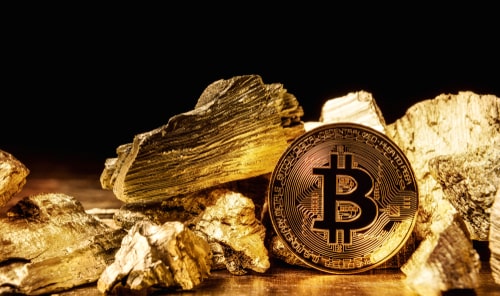 (Kitco News) JPMorgan weighed in on the debate whether or not bitcoin is stealing attention away from gold, stating that gold could "suffer" in the long-term as bitcoin is adopted more widely.

The problem for gold is that institutional investors are turning toward bitcoin. It is a new phenomenon that is likely to continue in the years to come, said JPMorgan strategists in a note to clients this week.

The bank's strategists show in their research that new investors embraced bitcoin in October and November while choosing to sell gold positions.

One example that the strategists provided is the Grayscale Bitcoin Trust, which had almost $2 billion of inflows since October. In comparison, gold-backed exchange-traded funds saw $7 billion of outflows, JPMorgan noted.

Right now, bitcoin represents only 0.18% of family office assets, while gold represents 3.3%, said the bank's strategists, including Nikolaos Panigirtzoglou. If this begins to shift dramatically, bitcoin could see new inflows of billions.

Bitcoin prices doubled in value from a low of $10,000 in September to just under $20,000 in November. During that time, the gold rally has stalled, and prices temporarily dropped below $1,800 an ounce.

JPMorgan is not alone in saying that a possible explanation behind this drop in gold-backed ETF demand could be bitcoin's record-high rally, which intensified last month

Singapore's United Overseas Bank (UOB) said in a report this week that the crypto's popularity could be partly responsible for gold's drop. Still, it is far from being the sole cause.

JPMorgan said that bitcoin prices in the short-term have run a bit ahead of themselves, noting the cryptocurrency's new record high of $19,850, which was reached on November 30. At the time of writing, bitcoin was trading at $18,331.30, down 1.22% on the day.