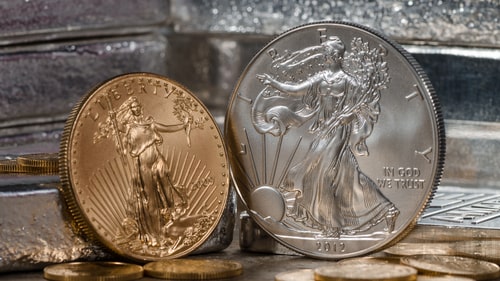 (Kitco News) Precious metals reversed losses and rallied on Tuesday as the focus shifted to the U.S. fiscal stimulus progress, more lockdowns, and the last Federal Reserve meeting of the year.

“Gold… recovered, but [was] outperformed by silver. Silver has risen twice as sharply as gold today … As a result, the gold/silver ratio has dropped to 76, its lowest level since the beginning of the month,” said Commerzbank analyst Daniel Briesemann.

Precious metals are “finding support from lockdowns in more and more European countries – with the Netherlands, Italy and the U.K. soon set to follow Germany’s lead – as well as in the U.S. state of New York, which appear to be dampening the risk appetite of market participants somewhat,” Briesemann noted.

There was also progress on the U.S. fiscal stimulus front as Congress continued negotiations on a newly proposed compromise worth $748 billion.

The bipartisan plan includes spending for popular programs both among Democrats and Republicans, such as an additional $300 per week in federal unemployment benefits and $300 billion dedicated to more loans under the Paycheck Protection Program. There is also a second part worth $160 billion, including more disputed areas, such as business liability protections and financial aid to state and local governments.

“The package looks set to be divided into two, which should increase the chances of at least one of the two parts being approved in the House of Representatives and in the Senate. The other stimulus measures that are currently still in force will expire at the end of the year. Without a new aid package, the recovery of the U.S. economy is likely to falter,” noted Briesemann.

All eyes are also on the Fed’s last meeting of the year, which begins Tuesday and ends Wednesday with the central bank’s interest rate announcement and Fed Chair Jerome Powell’s press conference.

Market participants are waiting to see a possible clarification around forward guidance and any new information on future bond purchases.

“The Fed will lean against the recent steepening by linking Q.E. to economic outcomes and extending the weighted-average maturity of its Treasury purchases. This should further reinvigorate speculative interest in gold, which has suffered from massive ETF outflows over the last six weeks,” said T.D. Securities commodity strategists. “Indeed, the nearest trigger in gold is now to the upside, as a break above the $1900/oz level would prompt a fresh round of CTA long accumulations.”