Is gold price gearing up for a Christmas rally? 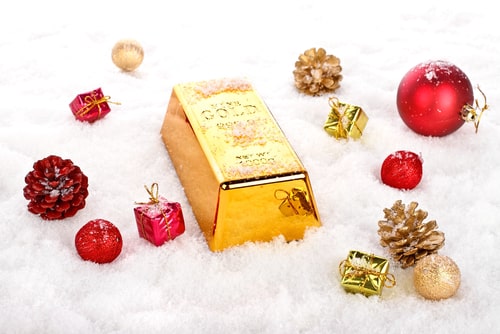 (Kitco News) As this tumultuous year winds down, the gold price seems to be positioning itself for a year-end rally as markets bet on more stimulus next week, analysts told Kitco News.

Gold price attempted to push through the key psychological resistance level of $1,900 an ounce this week but ended up settling just below that on Friday. February Comex gold futures were last trading at $1,888.70, up 2.5% on the week.

Gold saw a nearly $70 gain this week as Federal Reserve Chair Jerome Powell stressed that the central bank would continue its asset purchases until "the job is well and truly done."

"We do have the flexibility to provide more accommodation," Powell added. "The issue is getting through the next four-six months. Clearly, there is going to be a need for help there."

"Powell made it very clear that they will keep their foot to the gas, and he didn't anticipate any type of tightening until 2023. That means at least two years of the Fed indicating easy monetary policy and flexible inflation targeting," Hug said on Friday.

Hug remains very constructive on gold until the global economy begins to normalize in the third quarter of next year.

"From the fiscal perspective and the central bank perspective, they will continue to be accommodative, which will balloon the deficits and hurt the U.S. dollar. In that context, you have to be constructive on precious metals," Hug said.

"We are of the opinion that gold is trading cheap relative to real rates, and the precious metal will be playing catch-up. At the same time, the immediate impulse for higher prices is rather associated with a CTA buying program, in response to strengthening upside momentum," Ghali said. "The Fed's decision to tie QE to economic outcomes still supports the notion of a growth and inflation overshoot, which should provide macro tailwinds for gold in the longer-term."

The two key items on the agenda next week are U.S. fiscal stimulus and Brexit.

"Investors remain focused on whether politicians in Europe can drive a Brexit deal over the line and also whether Congress can avoid a government shutdown," said ING FX strategists. "We are biased towards progress on both and a continuation of this year's soft dollar environment."

Congress has just hours left to avoid a government shutdown and finalize the $900 billion coronavirus relief package. The federal funding lapses at 12:01 a.m. ET on Saturday.

"Over this weekend, we will know if the stimulus package will happen. $900 billion is already expected by the market. Any disappointment could be negative," Hug said.

"The other item on the agenda is Brexit negotiations. Right now, there is a better than a 50-50 shot that the UK will leave EU without a trade deal, and that will be positive for the metals next week," he added.

A no-deal Brexit would create fear and uncertainty and boost gold, Hug explained. "There could be a financial dislocation between London and Europe. It creates fear, and Europeans would then turn to buy gold."

Ghali is carefully eyeing the $1,920 level next week, which he describes as "the essential baseline level" that needs to be breached before the consolidation period is over. On the downside, he was optimistic that the $1,850 level could hold.

"The algos are looking for prices to remain above the $1,880/oz range for the buying flow to be sustained. Gold bugs are also looking for a break north of the $1920/oz range, which would technically represent the end of the consolidation period with prices breaking away from the bull flag. Given gold's relative cheapness and the ongoing algorithmic buying flow, we could imminently see a breakout," he said.

LaSalle Futures Group senior market strategist Charlie Nedoss highlighted $1,914 as a strong resistance level next week. Nedoss also noted that if gold falls below $1,877 next week, it will go on the defensive.

On the data front, markets will be keeping a close eye on the final U.S. GDP Q3 numbers on Tuesday. Also on the agenda are existing home sales on Tuesday as well as house price index and new home sales on Wednesday.