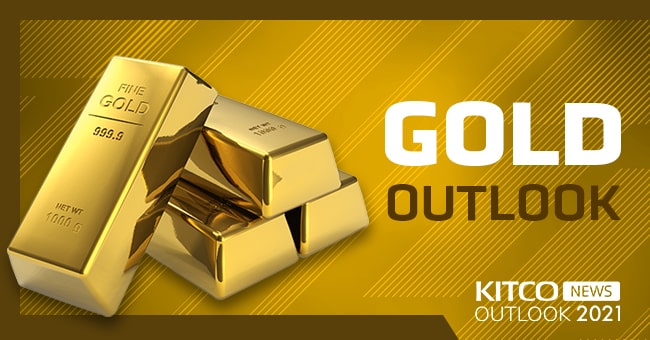 (Kitco News) Next year will lay out a path for a new normal as COVID-19 vaccines are distributed and the economic recovery gets underway. But where does this leave gold, especially considering that the global monetary policy remains very accommodative?

"If you take the optimistic side and imagine that many people do get vaccinated and the vaccine works, then the economy should take off in a serious way in the second half of next year. The inflationary scenario becomes a real possibility, which is positive for metals," Kitco Metals global trading director Peter Hug said.

As COVID-19 is maintained and controlled, consumer demand will increase and drive the economy higher, creating a supply shortage, which will trigger higher prices and inflation.

"People will return to the real world at a time when the supply of real goods will be constrained. Inventory levels are already very low because of COVID restrictions. On top of that, you had the professional class make more money during the lockdown. And most people in the low-income category also have some extra income due to stimulus. We could see more demand and drastically reduced supply," said StoneX director of global macro strategy Vincent Deluard.

Inflation seems to be the main risk to watch out for next year, with Capital Economics U.S. economist Andrew Hunter pointing to the very likely rise in goods prices as well as costs of services.

"Expect inflation to pick up relatively quickly. It is this potential upward pressure when you consider demand coming back strong and supply still being constrained. The goods inventories are unusually low. We'll see a pick up in prices for goods and services. Various industries will still be subject to various restrictions, and that will push up costs," Hunter explained.

On top of that, the Federal Reserve is willing to let inflation run hot without raising rates, he added. "It is pretty clear that the Fed won't be rushing to raise interest rates and will allow inflation to modestly reach their target. Easy to see that becoming an issue they'll have to address."

Economic recovery aside, the positive vaccine news does not solve the issue of global debt, added Guardian Vaults Business Development Manager John Feeney. "Vaccine is not going to cure the amount of global debt. Even if a vaccine is successful, I still think central bank policy will remain accommodative," Feeney said.

For gold, this means new all-time highs with more investors choosing to diversify into the precious metal in order to protect themselves from rising prices and currency debasement.

"The 2020 gold high will be taken out. If we get an inflationary surge again, gold north of $2,500-$3,000 is a real possibility until the central banks start to re-tighten. But tighter monetary policies are at least a year away, if not longer," Hug pointed out.

Next year will see central banks holding their foot down on the stimulus pedal with no chance of rates going higher. "In that context, you have to be bullish on the metal," noted Hug.

A big attraction of gold in 2021 will be its role as a protection against inflation amid massive quantitative easing and money printing, said Goehring & Rozencwajg Associates managing partner Leigh Goehring.

"2021 will be the year that investors believe that there is going to be a return of inflation. We haven't experienced anything like that for 40 years. At some point in 2021, it will happen. This is when the next leg of the bull market will take off," Goehring said. "With all this money printing we've gone through in 2020, next year will be the year we are all disabused of the notion that we can print money without consequences. Gold can go through $2,100, and we could possibly challenge $3,000."

The concept of gold being at the beginning stages of its bull run has resonated with a lot of the analysts.

"I am a big believer that in this bull market, gold is going to be significantly higher than the $10,000 an ounce level," said Goehring. "The first leg of the bull market was when gold went from $1,500 to almost $2,100. And after this corrective phase, gold will begin another huge bull move. Next leg could take gold above $5,000 an ounce."

Bloomberg Intelligence analyst Mike McGlone also pointed out that he doesn't see this gold market ending until we get to the bottom of the next bear market in stocks, which is still far away. "At some point, the fear of missing out on stocks will end, and gold will take off," he said.

McGlone pointed to rising debt-to-GDP ratio, quantitative easing, and the narrative in Modern Monetary Theory (MMT) as the reasons behind gold's move to new record highs next year.

Another key trigger that will boost gold towards $2,100 next year will be stock market volatility, Feeney added.

"The U.S. share market is trading at historical extremes because investors are optimistic about the vaccine curing it all. In 2021, we are likely going to have equity market volatility throughout the year, and that should be supportive of precious metals prices," he said.

One area to keep an eye on next year is the effectiveness of the vaccine as well as the number of people lining up to vaccinate.

"If the vaccine is not as effective or less than 50% of the population takes the vaccine, then the economy is going to struggle, and both the government and the Fed is not going to have any option but to increase stimulus," said Hug. "This will also be constructive for gold … There is a macro bull market in the metals, assuming the economy doesn't implode."

Another issue has been a weak physical demand in light of higher gold prices. On top of that, central banks around the world have paused their gold purchases, with the 2020 gold rally being primarily driven by the Western investor, Goehring pointed out.

"The Western investor will continue to play a huge role in the gold market. Central bank buying and Eastern gold buying will be pushed aside to make room for the Western investor. We saw the first stages of that shift already take place when gold was trading above $2,000," he said.

The investors in the West have been driving the gold-backed ETF inflows, which, despite slowing at the end of the year, saw record levels in 2020, according to the World Gold Council. "Net inflows of 916t (US$50.3bn) in 2020 remain well above the highest yearly amount on record," the WGC said in December.

Goehring sees new people embracing the gold market next year as money is pulled out of weaker bonds and flows into gold.

Feeney added that increased gold-backed ETF demand will continue into 2021, stating that gold is getting a lot of positive coverage and many investors still don't have exposure to the precious metal. "As we move into 2021, gold will rise on the realization that the vaccine will not cure all of our economic problems. It's at that point you'll see quite a bit of market volatility," he said.

Gold could also see some significant pressure from its digital rival bitcoin, which has surged past $20,000 for the first time ever in December. Some analysts are warning that the allure of bitcoin will steal some of the attention away from gold.

"A new nuance for gold this year is bitcoin's competition and demand. It is a fact that a lot of flows are going towards bitcoin. This might suppress the gold rally next year," McGlone said.

This is a unique and never-seen-before development, he added, noting that bitcoin is likely to continue to outperform gold. "To me, it is very clear that the price of gold would be higher if bitcoin didn't exist," McGlone said. "We've seen outflows in gold ETFs, yet the opposite in bitcoin."

JPMorgan Chase said in December that bitcoin's wider adoption will have a direct impact on gold, which could trigger a major shift in institutional allocation between the two assets.

"The adoption of bitcoin by institutional investors has only begun … If this proves right, the price of gold would suffer from a structural headwind over the coming years," JPMorgan strategists said.

Not all analysts agree with this premise. Walsh Trading co-director Sean Lusk said bitcoin could not hurt gold in the short-term. "Maybe 20-30 years down the line," he said.

Digix co-founder and COO Shaun Djie added that he does not see gold and bitcoin being in direct competition with one another.

"Bitcoin appeals more towards the digital audience, which wants to get into a store of value. Gold appeals to traditional investors and central banks. I think when central banks start to invest into bitcoin as they do in gold, that's when the crypto would become a real competition," Djie said.