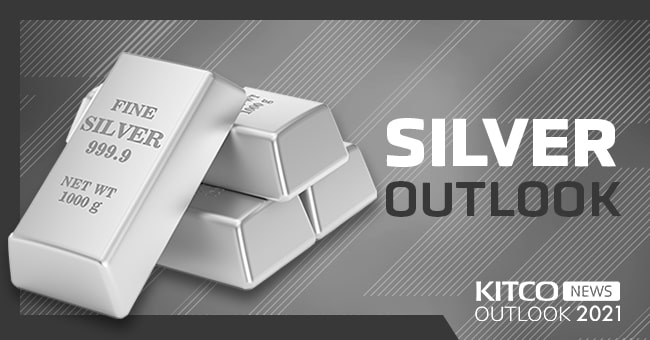 (Kitco News) - Gold will play an important role as investors look for protection against ultra-loose monetary policy and fiscal stimulus measures in 2021, but some analysts expect that the new year will be silver's time to shine.

The silver market has seen a breakneck rally in 2020 as prices more than doubled after falling to a multi-year low around $12 an ounce in March. Many analysts see the current trend continuing as global monetary policies and industrial demand come together to push the precious metal out from gold's shadow.

With gold expected to retest its 2020 all-time highs, some extremely bullish estimates have also crept into the silver market. As silver was able to double in value from the March lows, some analysts have said that the feat can be achieved again in 2021.

While a move back to $50 an ounce is not out of the realm of possibilities, most analysts see a more nuanced rally for the precious metal, with many looking for prices to push above $30.

Canadian Bank CIBC could be the most bullish on silver as they see prices averaging next year around $32 an ounce.

"Even though the commodity has already performed well year-to-date, this metal has the potential to provide investors with even more torque given the relatively smaller market for silver vs. gold," said Anita Soni, author of CIBC's precious metals outlook.

Bank of America expects that silver prices will outshine gold in 2021. The bank made headlines in November after it walked back its forecast for gold to hit $3,000 late next year. While the bank is neutral on gold, they remain overweight silver.

The bank said it sees silver averaging next year around $29.13 an ounce with prices pushing above $31 an ounce.

"Silver is our preferred play on rising investment in solar panels," the analysts said in their report.

"The recovery in silver industrial application is expected to outpace global GDP growth, with offtake in 2021 almost matching the 2019 total. Support will emerge from a range of end-uses, including photovoltaics and automotive demand," said Neil Meader, director of gold and silver, at the U.K.-based research firm.

According to the analyst, about half of the demand for silver comes from industrial uses, particularly in solar power, as silver is a critical component in photovoltaic solar panels. Although the amount of silver in solar panels has dropped, demand continues to grow.

In a report published in October for the Silver Institute, research firm CRU said they expect solar power generation to nearly double by 2025. The firm said that the solar industry is expected to use on average 81 million ounces of silver through 2030.

Although industrial demand will play an important role in the silver market as the global economy starts to recover from the COVID-19 pandemic, some analysts note that investment demand will be important.

Steve Dunn, head of exchange-traded products at Aberdeen Standard Investments, said in a telephone interview with Kitco News that he expects silver will continue to attract investors as it is still relatively undervalued compared to gold.

"I think silver's strong value play will be an important theme in 2021 for investors," he said. "Silver has made some big moves this year, but it still has room to catch up compared to gold."

However, not all analysts are bullish on silver next year. Harry Tchilinguirian, senior commodity economist at BNP Paribas, said in an interview with Kitco News in late November that he sees one more rally for gold in the first quarter and then lower prices into the end of 2021. He added that because of their close correlation, falling gold prices will also weigh on silver.

BNP Paribas is looking for silver prices to average about $23.50 an ounce next year.

Although Tchilinguirian see lower gold and silver prices next year, he added that silver’s industrial demand will help it generally outperform the yellow metal.