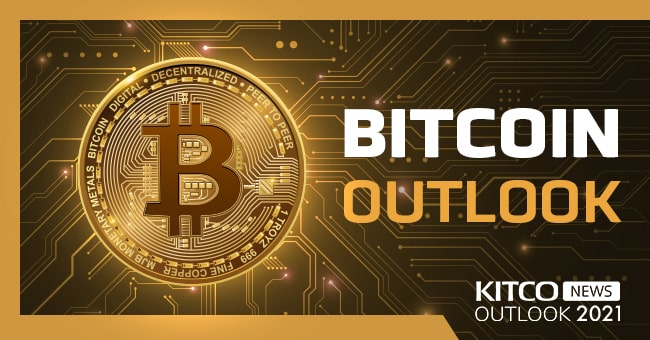 (Kitco News) As bitcoin gets ready to tackle $30,000, analysts point to one serious risk that could potentially challenge the cryptocurrency's phenomenal surge this year.

Bitcoin saw an incredible comeback from the March low of $4,607 to its new record high above $28,300 in December. This is a more than 500% rise in just eight months. And analysts are confident that more gains are in store for bitcoin as it currently trades above $26,500.

What makes this rally different from the one in 2017 is the consensus that bitcoin is here to stay, especially in light of the wider acceptance by big tech companies such as PayPal, analysts told Kitco News.

"Investors are buying up large chunks of the asset, and these are long-term investors. Back in 2017, the majority were retail investors, who are usually very skittish and can buy and sell wherever. Institutional investors usually hold," said TradingView general manager Pierce Crosby. "For example, Microstrategy now owns more than 70,000 bitcoins. Hedge funds are talking about putting 1% towards bitcoin. Tech companies are also getting involved. This kind of interest could mean trillions of dollars for the cryptocurrency."

The outlook for bitcoin is quite bullish for next year, said Crosby, adding that it comes down to the supply and demand fundamentals.

"Right now, we are seeing a resurgence of demand," he said. "Scarcity defines the future of a given asset. We've seen that a long time with gold. Every time they find a new big deposit, the price goes down. In the same regard, the scarcity of bitcoin is finite — 21 million. That scarcity plays into the future price."

Bitcoin's limited supply has been attracting new investors who are looking for safety and a hedge against inflation in light of all the money-printing happening across the globe to support the struggling economies.

"Attraction here is that bitcoin is covered by a limited supply. This year has heard a strong argument against the current QE programs. We've seen a lot more money printing this year, and there is a lot of cash going around. This money trickles down to a lot of assets, and they have seen some irrational moves like the stock market, which is seeing unprecedented growth despite the grim economic outlook," Digix co-founder and COO Shaun Djie explained. "In the next 12 months, you will see bitcoin being touted as a real store of value, and buying will only continue."

Another bullish factor going for bitcoin is legitimacy, added Djie, reminding investors that this year's rally is very different.

"In 2017, the surge in bitcoin was mainly driven by initial public offerings (IPOs), which led to a lot of scams. It is not something you see anymore. Also, institutions are getting involved, and we are seeing central banks issuing licenses and receiving money from retail," he elaborated.

The bottom line for bitcoin is that it becomes legitimate every day it doesn't sell off, said Bloomberg Intelligence analyst Mike McGlone.

On top of that, the COVID-19 pandemic has accelerated bitcoin's acceptance by the public due to the digitalization of the world, McGlone added. "COVID accelerated the shift towards digitalization of money. In the past, it was considered speculative interest money. Now, it looks to be solid money, and institutions are jumping on board," he said.

Bitcoin is likely to be one of the winning asset classes in 2021, said StoneX director of global macro strategy Vincent Deluard.

"Cryptocurrencies, which allow investors to bypass the financial system, are a game-changer," Deluard stated. "In 2021, if we see a significant correction in equity market and people will be worried about debt levels and inflation, bitcoin will be a way to move money outside the system. Bitcoin and gold are insurance policies against things going terribly wrong."

New regulatory restrictions remain the biggest threat for bitcoin, and this is something investors should keep a close eye on, according to analysts.

Bitcoin's bubble-like features are not going away any time soon, said OANDA senior market analyst Edward Moya, noting that a possible regulatory crackdown in the near future is one of the biggest threats.

"We are going to see that there is still a tremendous amount of uncertainty as far as how bitcoin is going to progress going forward," he said. "Biggest problems for bitcoin has been hacking and regulatory issues. As you see central banks start to consider their own digital coin offerings, there can easily be some type of regulatory crackdown that will eventually panic the institutional trader. But they will be as happy to ride it down as up."

With bitcoin's popularity exploding this year, there has been a lot of whispering among bigwigs in the crypto space around how the scale of adoption will be noticed by regulators, said Crosby.

"More regulation or crackdowns is a big risk to space. From a geopolitical perspective, a nation taking a stand against crypto is another risk. A formal policy being issued by Canada or the U.S. could be very detrimental."

Hacking is another major concern for bitcoin since it is all digital, analysts added. If the actual technology behind bitcoin were to be sabotaged in any way, that would pose a significant risk to prices.

"If someone can break into a wallet or a brokerage account, that is a huge disincentive for investors to take this thing seriously," Crosby pointed out. "This comes at a time of international espionage, and large hacking operations are being made public. This destroys investor confidence. Exchanges take this seriously."

This year especially bitcoin has been taking on the safe-haven role for many new investors coming into the crypto space, which has been weighing on gold's inflows, said Moya.

"The run-up in bitcoin was surprising but was mainly due to breakthroughs on Main Street acceptance. Right now, it is a fight for yield. And a lot of new institutional investors and hedge fund managers are getting involved," he said.

But any regulatory crackdown or increased hacking activity would take away that safe-haven play, Moya added.

Another factor to keep in mind is that there are no price breakers in place in case of a major selloff, noted Djie.

"Without breakers in place, when a big selloff comes, we might see bitcoin testing as low as $10,000 and even lower. Any announcements from central banks on the way bitcoin would be eventually regulated could trigger that selloff," he said.

The $50,000 level is a popular one for next year as that gets the cryptocurrency close to the one trillion market cap. In December, bitcoin's market cap was around $350 billion. In comparison, gold's market cap is currently at around $10 trillion.

"Bitcoin is heading towards 50,000 resistance next year, said McGlone. "After halving, the supply has been reduced, and demand is rising. That gets close to one trillion market cap, and it is about one quarter of 2017."

Best-selling author Robert Kiyosaki is also looking at bitcoin moving towards $50,000 next year based on new institutional money coming in.

Guggenheim Investments investment director Scott Minerd sees bitcoin as undervalued at above $20,000, adding that its worth is around $400,000.

Gemini crypto exchange founder Tyler Winklevoss told CNBC that he sees bitcoin rising above $500,000. Citibank is not ruling out $318,000 by the end of 2021.