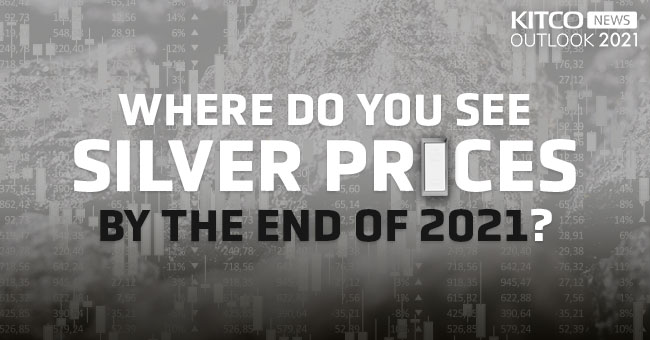 (Kitco News) Kitco's silver survey results are in, and the average response to "where do you see silver prices at the end of 2021" was $38 an ounce, while the most popular response was $50 an ounce.

Analysts are also quite optimistic on silver this year, with Bloomberg Intelligence saying that silver's bull market is just beginning and that the precious metal is the "primary metal" benefitting from electrification and quantitative easing next year.

"Silver may be a primary metal at the forefront of favorable trends in electrification and quantitative easing, with technicals pointing to a nascent bull market, in our view," Bloomberg Intelligence senior commodity strategist Mike McGlone said in December. "Uniquely precious and increasingly industrial, probabilities lean toward the metal -- known as leveraged gold -- following its yellow peer to new highs."

New record highs for the silver market would be a breach of the $50 an ounce level. A move like that would double silver's current trading levels. At the time of writing, March Comex silver was trading at $25.22, up 2.55% on the day.

Bloomberg Intelligence compares silver's price potential to that of 2008, which saw the start of a rally that took the metal to nearly $50.

In 2020, the silver market saw an impressive rally with prices more than doubling after falling to a multi-year low of around $12 an ounce in March.

Many analysts cite global monetary policies and industrial demand as the two main supportive drivers for the metal this year.

"Even though the commodity has already performed well year-to-date, this metal has the potential to provide investors with even more torque given the relatively smaller market for silver vs. gold," said CIBC Capital Markets managing director Anita Soni.

Bank of America expects that silver prices will outshine gold in 2021, projecting for prices to push above $31 an ounce next year. "Silver is our preferred play on rising investment in solar panels," the analysts said in their report.

Metals Focus also sees silver rising above $30 an ounce next year. "The recovery in silver industrial application is expected to outpace global GDP growth, with offtake in 2021 almost matching the 2019 total. Support will emerge from a range of end-uses, including photovoltaics and automotive demand," Metals Focus said.