LONDON (Reuters) - The U.S. dollar held onto its recent gains on Tuesday after a spike in U.S. Treasury yields lifted demand for the currency.

The dollar had hit a more than 2-1/2-year low in January after sliding for months as ultra-dovish policy from the Federal Reserve encouraged investors to seek alternative currencies.

But expectations for a wave of spending under an incoming Joe Biden administration have pushed Treasury yields higher, with the 10-year yield reaching a 10-month high on Tuesday. The dollar has bounced 1.5% since last Wednesday.

Not only have markets brought forward bets on Fed interest rate increases to 2023, many also reckon it could start withdrawing, or tapering, asset purchases earlier.

The dollar index, which measures the greenback against a basket of currencies, was unchanged at 90.438, above lows of 89.206 hit last week. 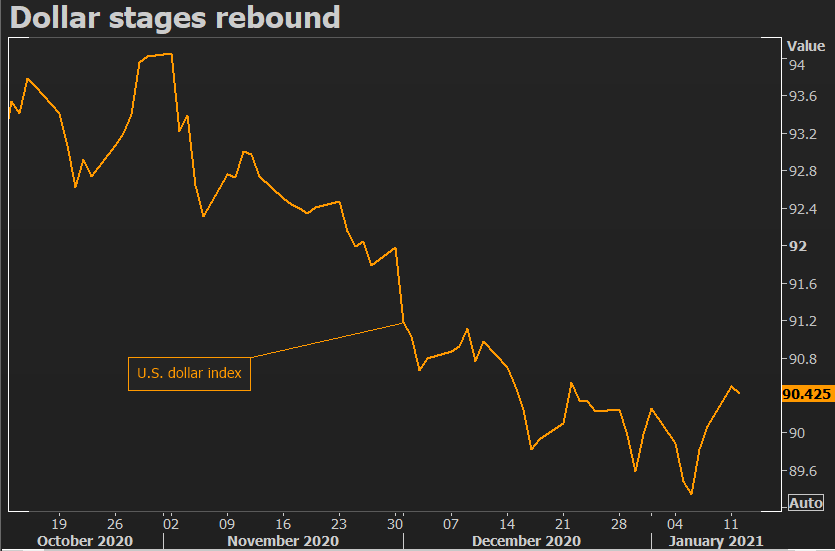 The support from rising yields has so far trumped worries that the extra spending could trigger faster inflation. But many analysts expect the dollar to resume its decline as stimulus spending and vaccine rollouts brighten the global economic outlook.

ING analysts said Fed officials due to speak later on Tuesday were likely to pour cold water on any suggestion of slowing monetary stimulus support.

“Any policy-related comments should – in our view – go in the direction of ruling out any unwinding of monetary stimulus in the foreseeable future,” they said.

“With the Fed’s rate expectations firmly at the bottom, any further rise in U.S. yields will remain a function of rising inflation expectations or term premium, which leaves us confident on our bearish-dollar call.”

Morgan Stanley, however, has recommended a neutral view on the dollar. It has closed a dollar-bearish trade versus the euro and the Canadian dollar and removed its bullish view on emerging market currencies, in part because U.S. real rates are likely “troughing”.

With equity markets back in a bullish mood, riskier developed market currencies such as the Australian and New Zealand dollars also rose. Both gained about 0.4% <AUD=D3.

Bitcoin stabilised at around $35,500 after Monday’s huge drop. The cryptocurrency’s rally has faltered since it soared to a record high of $42,000 on Jan. 8.