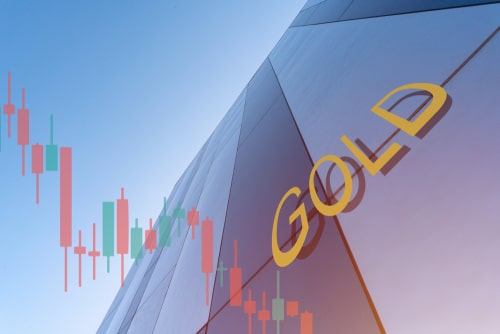 Gold is still under pressure on Tuesday, but analysts are not ruling out a move higher as they pay close attention to the new Federal Reserve debate and higher U.S. yields.

The yield on the U.S. 10-year Treasury note rose to its highest levels in nearly a year on Tuesday, last trading at 1.169%.

"Make no mistake, U.S. bond yields at present are nowhere near worrisomely high levels that might suggest high inflation. However, it's the trajectory of the yields that is raising eyebrows, and merits continued close observation. High inflation is usually the enemy of the stock markets and the friend of commodity markets," Wyckoff wrote.

Gold's move down began on Friday when prices tumbled more than $70 in one day. "[There was] a shake-up in complacent positioning as a Blue Senate forces Treasury markets to price-in a substantial increase in supply, in turn lifting rates and the broad dollar, while wreaking havoc on gold," explained TD Securities on Tuesday.

A lot of the price action in the last three trading sessions has been technical selling, said StoneX head of market analysis for EMEA and Asia regions Rhona O'Connell.

"The speed of the falls certainly suggests that stop-loss orders (automatic trade orders) will have been hit, and momentum trades will also have been executed," O'Connell said on Monday. "Stop-loss orders are exactly what the name implies; they are orders resting for a trade (in this case, a sale) when a price moves through a specific level, which closes out a position that has become loss-making."

Causing confusion in the marketplace this week was a new debate between the Federal Reserve officials around whether or not to taper bond purchasing during the course of the year.

"The discussion was initiated by Fed President Bostic, who can also imagine a first rate hike being made in the second half of 2022 or 2023. This would be considerably earlier than previously expected, further fuelling the upswing in yields," said Fritsch.

It remains to be seen what the Fed will decide to do, which is why the next Fed meeting, which is scheduled to happen in about two weeks, will be gathering extra attention from the market participants.

The recent Fed speak does suggest that the central bank will want to test the resilience of the U.S. equity market, said TD Securities, adding that gold is an inflation-hedge "only inasmuch as the Fed's stance on rates translates into a low rates vol environment."

"Recent Fed speak has pushed back against the need to immediately extend the weighted-average maturity of their Treasury purchases, suggesting officials are testing the resilience of equity markets against higher rates. This argues for a different trading regime than we have operated in for the last nine months — if the Fed is comfortable with a steepening rates curve, it challenges the view that inflation expectations may rise without a commensurate rise in rates, suggesting gold is reverting into a safe-haven asset," TD Securities explained.

However, it is important to differentiate short-term weakness in gold in light of the higher yields versus the longer-term potential of the precious metal.

"Looking on the horizon, it seems that an imminent covid-relief bill and the prospects for a substantial infrastructure package down the road should support higher inflation expectations and, in turn, translate into a higher price for inflation-hedge assets," TD Securities stated.

The recent move down has shaken out a lot of the weaker positions in gold, while the macro environment remains supportive of higher prices, added O'Connell.

"While sentiment in the short term is arguing that the rise in U.S. yields, in the expectation of further stimulus, is working against gold, the prognosis for the medium term remains positive, with economic and financial elements supportive," she wrote on Monday. "President-elect Biden has promised massive fresh stimulus … With the world's major central banks having injected over $7Tn in liquidity last year, and with more to come, there is a lot of liquidity looking for a home, and the background fundamentals continue to point to gold as a safe-haven asset, for the next few months, at least."

Another important point to keep in mind is that the recent selloff was not accompanied by significant ETF outflows, said Fritsch.

"Taking the inflation rate into account, real interest rates remain negative in the U.S., too. This continues to argue in favor of gold, as does the expected sharp rise in U.S. national debt due to further trillions of dollars in economic stimulus packages likely to be approved by the new U.S. government. What is remarkable is that the latest slump in the gold price was not accompanied by significant ETF outflows. It is therefore likely to have been driven first and foremost by speculative selling," he said on Tuesday.