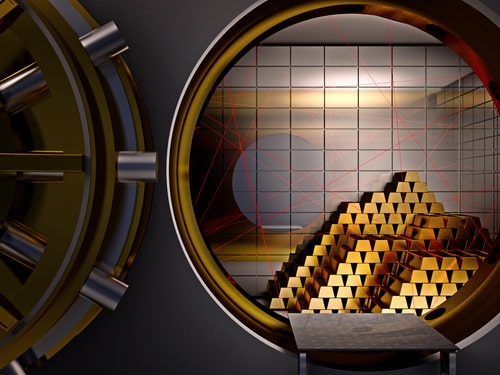 (Kitco News) The value of Russian gold in its forex reserves has surpassed the country’s U.S. dollar holdings for the first time, said Russia’s central bank.

The country’s total gold reserves as part of the foreign exchange holdings were up at 22.9% as of June 30, 2020, according to Russia’s central bank data. In comparison, the U.S. dollar holdings declined to 22.2%.

The euro holdings also shrank to 29.5%, and the holdings of the Chinese yuan were down to 12.2%. These statistics are published with a six-month lag.

The latest data on official gold reserves published by the World Gold Council confirms no new activity from Russia.

However, overall, central banks around the world became net sellers of gold in November as they sold more than they bought, according to the data.

This is not the first time that happened in 2020. Central banks were also net sellers in August and September. The month of August marked the end of a year and a half-long period of monthly gold purchases.

In November, official global reserves declined by 6.5 metric tons. Looking at the numbers in more detail, there was a total of 16 tons of gold bought in November. The countries that added the most to their reserves were Uzbekistan with 8.4 tons, Qatar with 3.1 tons, India with 2.8 tons, and Kazakhstan with 1.7 tons.

On the other hand, 23.3 tons of gold was sold in November, with Turkey leading the pack.