(Kitco News) ETF inflows into the gold space hit record levels in 2020 as prices gained 25% on an annual basis, according to the World Gold Council (WGC).

Gold-backed ETFs saw a record net inflows of 877 metric tons or $47.9 billion last year, beating the 2009's record of 646 tons added in one year. The new total ETF holdings reached an all-time tonnage of 3,752 tons, the WGC said in a report on Wednesday.

The uncertainty surrounding the COVID-19 pandemic was highlighted as the main reason behind the increased interest in gold. Gold prices were a reflection of that as well, as they climbed to a new record high of $2,067.15 in August and then consolidated below $1,900 an ounce for the rest of the year.

"The heightened risk environment, fiscal and monetary responses to the economic impact of the pandemic, and gold price momentum continued to drive inflows well into H2," the WGC said. "The pace of inflows slowed after the gold price hit a new record high – above US$2,000/oz in early August – before correcting to the US$1,900/oz level."

The biggest ETF gainers were the SPDR® Gold Shares and iShares Gold Trust, which added more than 50% of total global ETF inflows.

The weakest months of the year for ETF demand were November and December, the WGC pointed out.

"As investors reduced hedges and increased risk-asset exposure amid positive sentiment following the U.S. election and the announcement of successful COVID-19 vaccines, there were sizeable outflows of 109 tons in November. And while outflows continued into December, they slowed considerably and were modest by comparison, at 40 tons," the report said.

This weakness led to a net outflow of 130 tons in Q4, the WGC said, noting that North American and European funds saw the biggest losses. 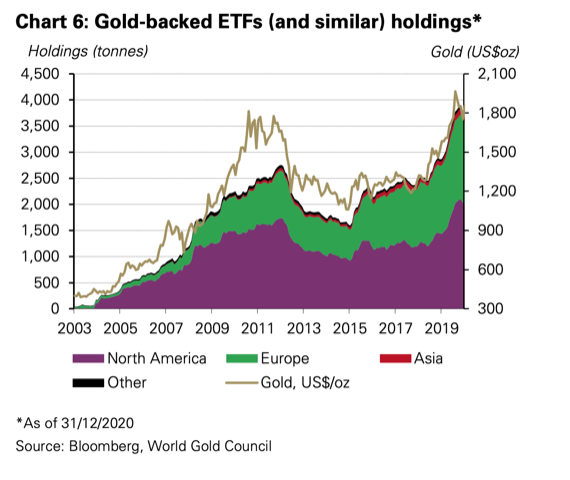 Aside from the historic ETF demand in 2020, physical demand for metal was mixed, added the WGC.

"Strength in western markets and weakness in eastern markets (before recovering in Q3). As a result, over the first three quarters of 2020, gold ETFs accounted for almost two-thirds of total investment demand. This is significantly higher than any previous full year."

For perspective, gold-backed ETF demand was equivalent to a quarter of the average annual gold mine production over the past five years, the report said.

For 2021, the WGC's forecast remains optimistic, noting that the gold's fundamental drivers, which took the precious metal to record highs, are all still there.

"Many of the same drivers of gold demand should continue, such as lower rates and improved opportunity costs, fiscal stimulus, lofty stock valuations, and the economic effects of COVID-19," the report noted.