Wall Street futures were pointing higher too while in the bond markets there was starting to be signs of selling again.

Luca Paolini, Chief Strategist at Pictet Asset Management, said an ongoing rise in borrowing rates could unsettle markets if they start to accelerate.

“It could be a bit difficult,” he said. “Although I would rather have the Fed (U.S. central bank) hiking rates, bond yields at 4% and growth at 5% rather than everything at zero, because it’s more sustainable.” 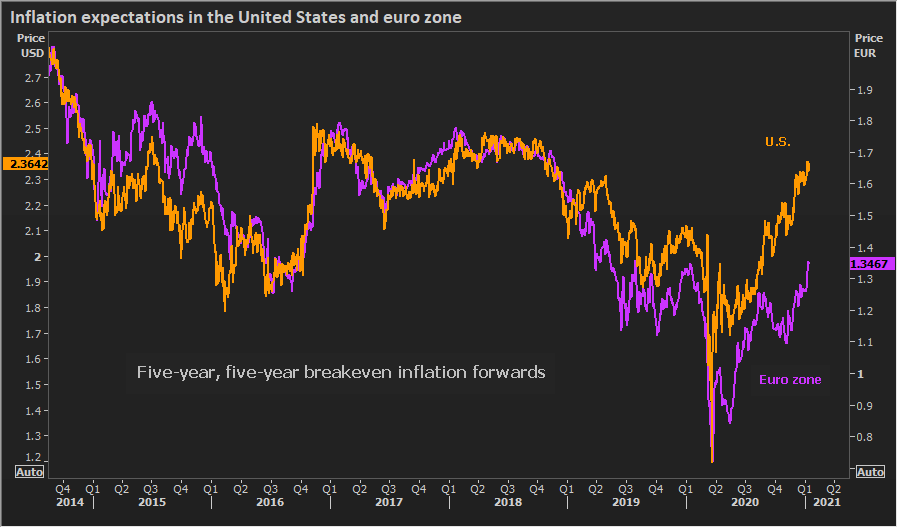 There had been plenty of action overnight in Asia too.

Japan’s Nikkei hit its highest level since August 1990 taking its surge since late October to 25%. [.T]

Chinese blue chips eased from a 13-year peak hit on Wednesday as investors took some profits [.SS] though it didn’t tell the full story.

The Hong Kong listed shares of Chinese tech giants Alibaba and Tencent and Baidu all rose sharply after sources told Reuters and the Wall Street Journal that plans to extend a U.S. investment ban to the firms stocks had been scrapped.

Alibaba and Tencent alone are worth over $1.3 trillion and are two of three biggest emerging market stocks in the world, making up more the 10% of the widely-followed MSCI emerging market equity index.

“However, concerns over this risk and therefore volatility of these stocks may continue in the near future until perhaps the new (Biden) administration’s China strategy becomes clear.” 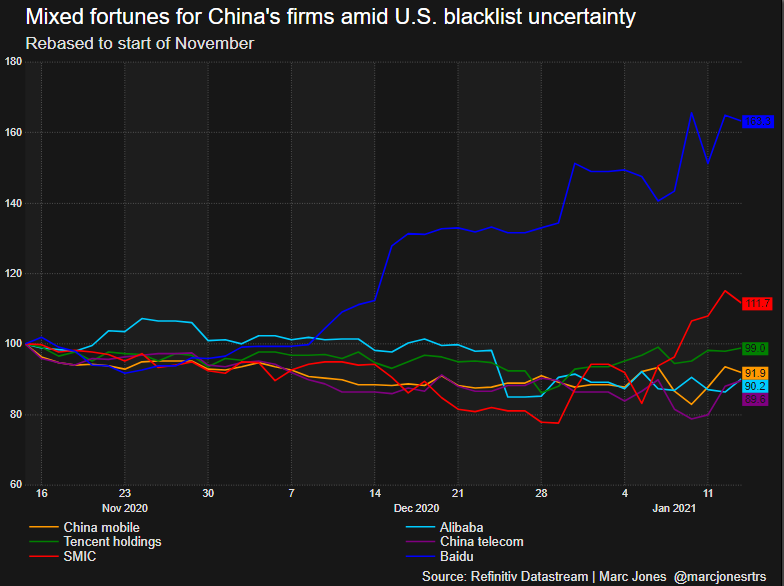 Global deaths from the virus are fast approaching 2 million and there has been further worrying news this week about a new Brazilian variant, China’s first recorded death since April, and tightening new social restrictions from South Africa to Scotland.

Biden is due to outline his economic plans later on Thursday and U.S. Federal Reserve Chairman Jerome Powell will also speak, either one of which could set yields rising again.

“The number one question for global markets and equities will be when will the Fed start tapering,” said Frank Benzimra, head of Asia equity strategy at Societe Generale in Hong Kong.

“This is where you can get some concern... but at the moment it is something that is a bit premature.”

Currency markets are taking a little more of a wait-and-see approach, as investors are short dollars and wondering whether the eventual tapering might limit the greenback’s decline.[FRX/]

“Fresh elections (in Italy) are still very much the outside bet but it does seem we could be on our way to our 132nd Italian government in the last 160 years.” said Deutsche Bank economist Jim Reid.

Additional reporting by Dhara Ranasinghe in London and Tom Westbrook in Singapore; Editing by Simon Cameron-Moore and Angus MacSwan