(Kitco News) - Anglo Asian Mining (AAZ:LSE) have struggles in recent times as they operate in Azerbaijan. There has been conflict in the nation and the firm now welcomes the agreement between Armenia, Azerbaijan and Russia which has ended the military conflict over the enclave of Nagorno Karabakh.

Three contract areas have been now been restored to the company. The Kalbajar district, Kyzlbulag in Nagorno Karabakh and Vejnaly in the Zangilan district.

The firm now says it will fully evaluate the potential of the three restored contract areas when permission to access is received from the Government of Azerbaijan.

Reza Vaziri, President and CEO of Anglo Asian Mining, said "It is a tragedy that this long-standing territorial dispute has resulted in a humanitarian crisis and significant loss of life. Anglo Asian Mining very warmly welcomes the recent ceasefire agreement which ended the hostilities. The conflict has resulted in extensive damage across the region which will require substantial investment to repair and rebuild.".

He then added "Anglo Asian Mining will work with the Government of Azerbaijan, pursuant to its contractual rights, in the three restored contract areas within the Zangilan and Kalbajar districts as well as in Nagorno Karabakh. The Company will properly manage and invest in the mineral resources of the region to the benefit of the local communities and other stakeholders. Anglo Asian Mining has been a model of sustainable and sound mining practices at its current operations while working with, and investing in, the local communities. The Company intends to bring that commitment to high-quality development to its restored contract areas in the regions internationally recognised as part of Azerbaijan and which have now been returned to Azerbaijan, following the declaration by the Governments of Armenia and Azerbaijan and cessation of hostilities.".

The share price jumped 10% in early UK trade as the news filtered in. Now there is a resistance area at the blue line which the bulls are looking to take out. There has been a decent amount of volume which backs the move higher and if there is to be a break of 145 then the high on the chart at 175 could be targeted. 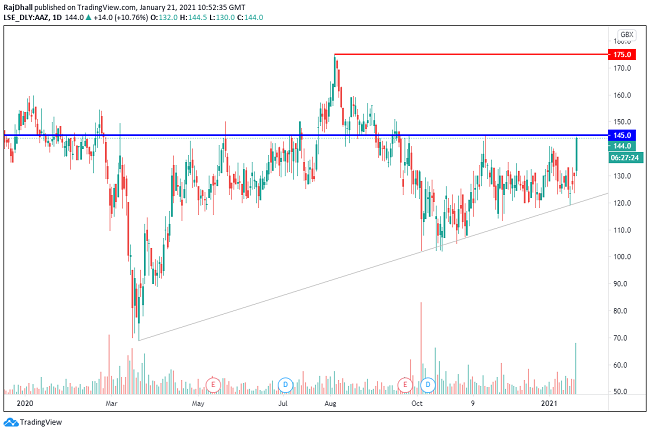