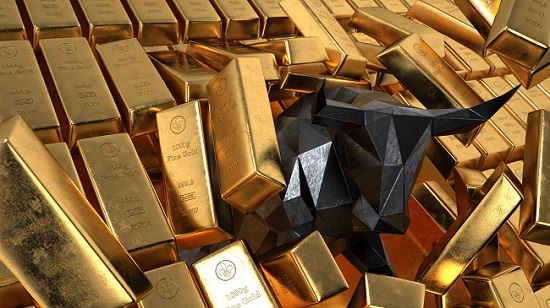 (Kitco News) - The gold market continues to attract strong bullish sentiment among retail investors and market analysts even as the metal has lost momentum and prices are consolidating.

For many analysts, the gold market is caught in a tug of war between growing expectations for a stronger-than expected economic recovery and rising inflation fears. However, according to the latest Kitco News Weekly Gold Survey, both Wall Street and Main Street expect inflation to tip the scales and push gold prices higher.

This week, 15 analysts participated in the survey. A total of nine voters each, or 60%, called for gold prices to rise next week; meanwhile, bearish and neutral votes garnered three votes or 20% each.

The bullish outlook comes as the gold market rebounded from support at $1,800 an ounce at the start of the week. However, gold waned heading into the weekend. February gold futures last traded at $1,859.10 an ounce, up more than 1% from the previous week.

"It was an impressive week for gold as it shook off headwinds to finish higher," said Adam Button, chief currency strategist at Forexlive.com "The risk is that rising Treasury yields will undercut the rally."

Although the gold market has struggled to find consistent momentum in the start of the new year, many analysts are not giving up on the precious metals just yet, especially as the U.S. government looks at creating a $1.9 trillion stimulus package, proposed by President Joe Biden, who was officially sworn in on Wednesday.

"The fundamentals favor gold, particularly the excessively easy monetary policy being pursued around the world," said Adrian Day, president and CEO of Adrian Day Asset Management. "Over the medium and longer term this will lead to a dramatically higher gold price, as the precious metals and global liquidity are closely correlated."

However, not everyone is convinced that gold is ready to move higher. Charlie Nedoss, senior market strategist with LaSalle Futures Group, said that he expects gold prices to continue to consolidate as the 200-day moving average around $1,861 is acting as a fairly sturdy wall.

He added that he thinks the market is waiting for more information regarding Biden's proposed stimulus plan.

"The gold chart is getting a little sloppy so I think we consolidate at these current levels," he said. "Gold really needs news on the stimulus because that is what is what is going to keep pressure on the U.S. dollar."
Darin Newsom, president of president of Darin Newsom Analysis, said that next week will be significant for gold's technical outlook. He added that the precious metal continues to be dominated by U.S. dollar strength. He added that if the U.S. dollar can end the month in positive territory, it could create a technical bullish pattern, which would be negative for gold.

"I think right now the market wants to consolidate as we wait to see what happens next with U.S. bond yields and the U.S. dollar," he said. "There are just so many mixed signals in the marketplace right now."

Bannockburn Global Forex managing director Marc Chandler, said that although gold has had a good week, the price action is still a little disappointing as the market trades below the 200-day moving average. He added that sees lower prices in the near-term as the U.S. dollar will remain a strong headwind for the precious metal in the near-term.

"I think USD upside correction is messy but still intact. It looks like US yields have moved into a new albeit higher range," he said.

Richard Baker, editor of the Eureka Miner 's Report said that he has also turned bearish on gold in the near-term.

"The current trifecta market bet for the U.S. is improved vaccine rollout, generous stimulus and steadily improving economy with the new administration. As long as all three remain positive, equities will rise and gold will fall," he said.